The Story of Arsenal

Awhile back, let's say January, I caught wind of a friend's young son and his decision to get a prosthetic. It was a choice that took some deliberation, and there was nervousness all around. It's a big adjustment, after all.

I felt for the kid. I had lots of adjustments early on with my lazy eye: thick glasses frames, eye patches, two surgeries before third grade (followed by days of eyes itching under bandages; imagine being blind and itchy that young -- no fun). My eye isn't quite so noticeable now, but I don't have true binocular vision, and I can't see 3D movies (silver lining: cheaper movie tickets). So I sympathize with his inconveniences. I wanted to do something. I offered to make that transition to prosthetic seem a little less cumbersome by turning him into a superhero.

There are a couple of established heroes with prosthetics. Lightning Lad of the Legion of Super-Heroes has a mechanical arm. Box, the Canadian Iron Man, started as a suit for a multiple amputee. Hellboy has an iron hand. Fox's MANTIS show gave a paraplegic a superhero alter ego. Winter Soldier (Captain America's revived Bucky sidekick) has a prosthetic arm. This kid was getting what's called a Hosmer hook, the classic pincher prosthetic, and the shape suggested lots of possibilities. 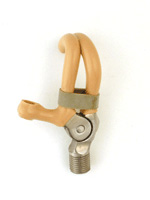 I started sketching some applications, mostly of the trouble-making variety. If I was, say, eight years old, what would I want this thing to do? I sketched. 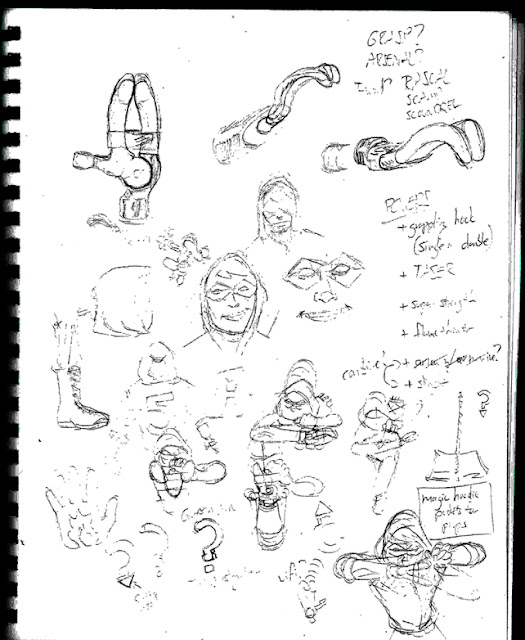 If he wanted to use the prosthetic as a slingshot, for instance, I imagined he had a bottmless ahamn's bag of a front hand pocket. That would be his quiver. I also needed a name, something that suggested the range of uses for the prosthetic. "Arsenal" made the cut quickly, and, after his mom's blessing, I ran with that. She also preferred Arsenal be a younger hero and not an adult. No problem. My comic imprint is Robot Wonderboy; I likes me the template of younger heroes. 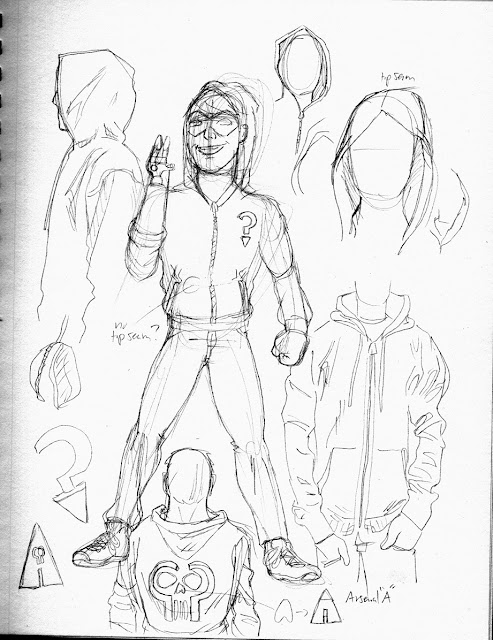 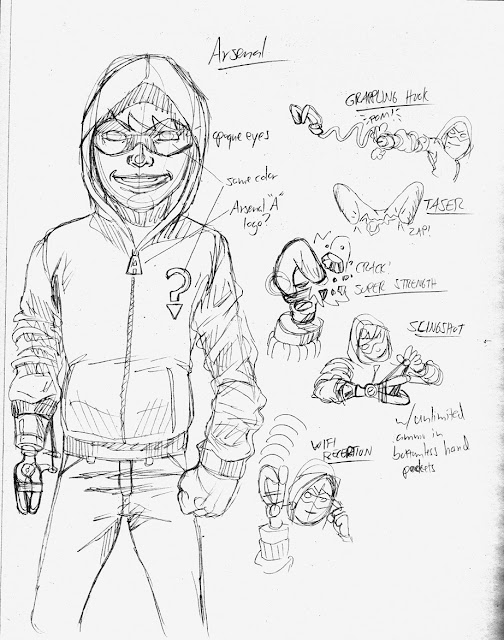 A hoodie seemed a good compromise for a cape, and a domino mask was a must. I played with symbols for a bit, abstracting the hook into a question mark to suggest mystery and aligning opposing question marks as the contour of a skull. With feedback from his mom, we narrowed it down quickly to a stylized A. I dummied up an illustration for the standard 11x17 artboard used to make comic pages. The piece would have inset images to show the various uses (aside of course from what else he might come up later on) 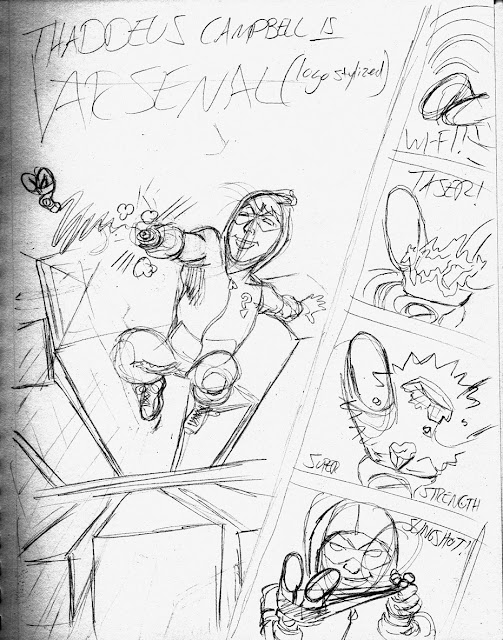 Once that was approved, it was time to make with he drawing. And it was right then that I hit the wall.

I wanted a classic Spider-man type image, with our web/line-slinger above the bustling cityscape. But my perspective work stinks and stinks some more. After some very bad attempts to flesh out the image, I ran to Google's free Sketch-Up software to build a city block. 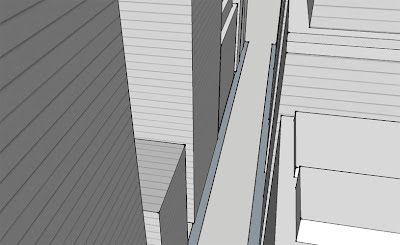 For a while that was gonna be the background I would copy. But it didn't feel right. Also, I was a little burned out after polishing my comic book (Battle Royal, buy your copy here), and my art muscles were exhausted. When I tried to draw the classic Spidey/Robin swinging pose, nothing looked good.  I had to let this sit for a while to recharge. And when I came back to it, I had my swinging pose. Just like that. It fell out of my pencil during a lunch break at those Ingles dining tables. 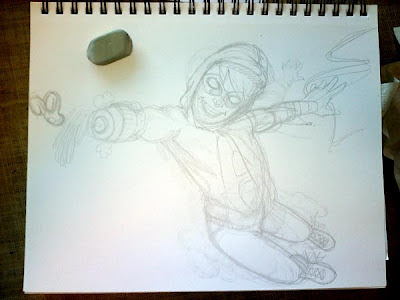 I refined it for the vertical composition, and realized soon after, while looking through the Ingles storefront onto the mountains, that I should use Asheville for the city. I Googled up the skyline from various images and played fast and loose with it. 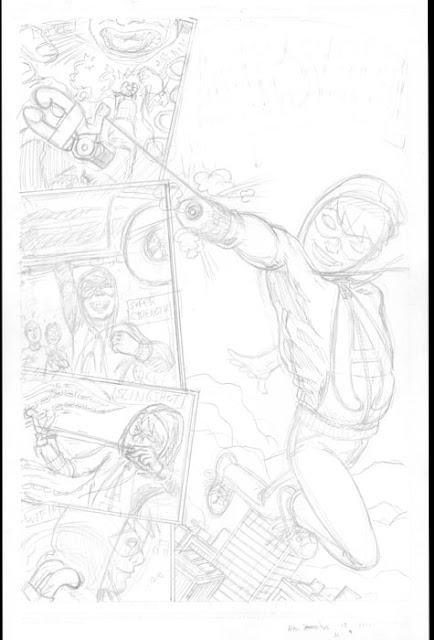 I used my son's toy car for the super-strength reference image, changed the slingshot image's threatening hands into tentacles, and softened up the taser victim's features to suggest a pseudo-Hulk.After getting final approval of the prosthetic depiction, I used a lightboard to trace the image to another board and inked that. 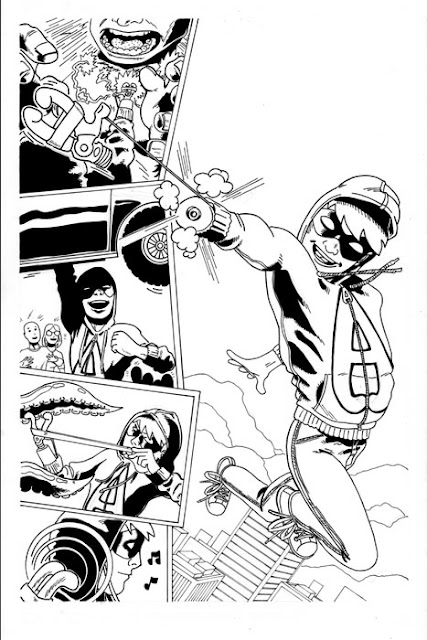 Next I scanned in that page and played with overlaying text, including the logo. I printed those out, cut them out, and pasted them over the inks. 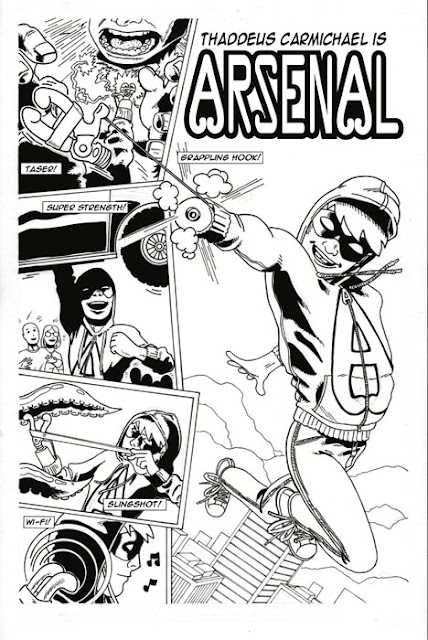 Just a week or so back, I heard that Marvel had done something similar for a boy who wouldn't use his hearing aid. They made him into a hero called the Blue Ear. My hero idea didn't seem so slight and goofy after all.

I gave the artwork to his mom today over lunch. I also included some Xeroxes on a thick paper stock so he can color in the image. I always saw Arsenal as wearing a red hoodie. I'll be curious to find out how he sees it.
Posted by Gregory at 1:27 PM