This is the last of the short Marvel Ladies theme. This is Tigra, the cat lady hero person, who you have to think influenced the design of DC's Starfire, another orange heroine with green eyes who fights in a bikini. 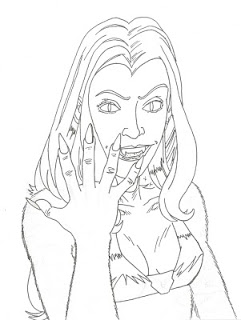 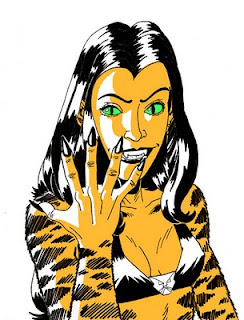 Next week, we start the October theme: Spooky Monsters of Spooky Spookiness.
Posted by Gregory at 5:49 AM No comments:

Email ThisBlogThis!Share to TwitterShare to FacebookShare to Pinterest
Labels: tigra 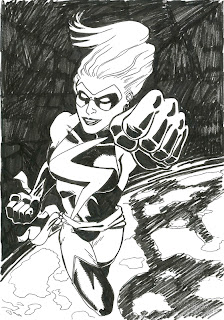 I almost cheated here and added stars digitally.
Posted by Gregory at 6:00 AM 2 comments:

A few years back, for my brilliant sister-in-law in med school, I drew a bierfrau for a fundraiser. Originally the image had an agency logo on the pitcher in her right hand. That's why it's so prominent in the artwork. Bier gardens make for popular fundraisers, and this lady has been dusted off a few times. When used a second time, we removed the agency logo, and we e recycled the image again this year, with small tweaks, for a special Tex-Mex Oktoberfest fundraiser.

Come on, chili in October? That's when you need it. And what goes better with chili than German beer or local microbrews? 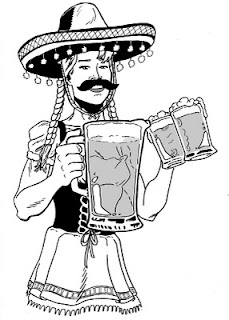 Posted by Gregory at 6:35 AM No comments: 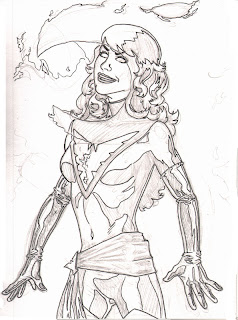 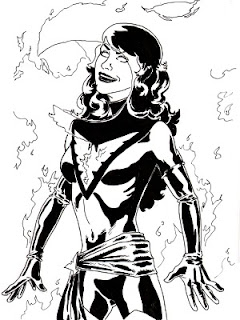 Posted by Gregory at 6:06 AM No comments: 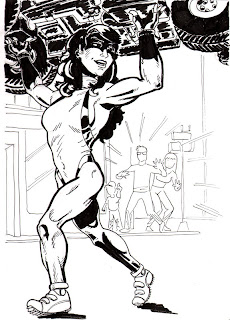 I'm starting to see dividends in working at a larger size. It even inspires me to try backgrounds. BACKGROUNDS!

Still struggling with inking. The lines softened a bit; that front shoe looked much stronger in penciled form. But I added all the thick black spots on her arms and head and the car's undercarriage in the inking stage, and that didn't come out too badly. I'm encouraged.
Posted by Gregory at 6:12 AM No comments:

Email ThisBlogThis!Share to TwitterShare to FacebookShare to Pinterest
Labels: I typed "undercarriage", She-Hulk

I'm still playing with the larger size of the new sketchpad and drawing styles. You can see how I somewhat flattened the hair for a strong design element. I wanted to better define the fingers but keep the bent leg simple and save myself the aggravation of a realistic contour. That's what I need overall: simpler, surrendering to design and energy. 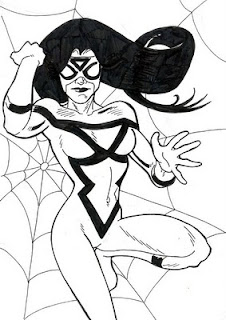 Posted by Gregory at 7:21 AM No comments: 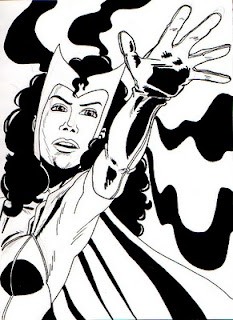 Here's the Scarlet Witch, the mentally unstable daughter of Magneto and brother to Quicksilver. She manipulates chaos magic to create unlikely events. She married a robot and magiked up a pair of twin babies she later learned were figments. Then she beset the Avengers, her teammates, with a slew of doomsday situations, destroying their mansion and necessitating a new team formation.

This is my first art in the new sketchbook which is supposedly suited for wet media -- heavier paper stock and all that -- but my Sharpie ink bled right through. I was playing around here with the new book dimensions. I didn't sketch out a composition before I started penciling, so the angle shoved her right of the page.
Posted by Gregory at 7:02 PM No comments:

If you feel you will not escape the 9/11 anniversary coverage this weekend, and you want to navigate toward material that will truly encourage and strengthen you -- as opposed to what the majority of media outlets will try to do -- check out Scott Raab's excellent series for Esquire as he delineates the efforts to build a practical and respectful new World Trade Center amid a storm of politics and sentiment.

Thoughts on the Con

So, yes, DragonCon 2011 was a fun time. The missus and I dressed again as GI Joe characters Shipwreck and Lady Jaye (as seen in this fine person's Flickr album). My pictures are here.

Ruminations:
1) Lots of people. 45,000 people. Once you're in the common areas of the hotels, you shuffle only. You can't stride until you make it to a guest room hallway, connecting airwalk tube, or the street.

2) This makes courtesy and patience mandatory, not just preferred.

3) Which is a lesson the football fans could have used as they were checking out of our hotel Sunday morning. The very definition of white plight is your constant bemoaning of a 10-minute wait time in an air-conditioned lobby while the valets retrieve your car. Compare this to the wait times convention attendees endured for their favorite panels.

4) Speaking of patience, I applaud everyone for not clobbering that jerk street preacher deliberately provoking those headed to the parade Saturday morning. I missed that part of the gospels where Jesus yells at children.

5) And there were a number of children at the convention, which is good and bad. Good in that they get to see their favorite characters walking about. Good in that they made for a great parade audiences; seeing their faces as we yelled the name of their costumes as we walked by was a highlight of the trip. Bad in that the foot traffic was bad enough without adding strollers.

6) And you might argue, well what about people in wheelchairs or scooters? Far be it from me to deny those folks from attending. I complimented a guy in his Han Solo outfit as we headed back to our hotels for the night. Wheelchairs are necessary vehicles. Strollers ain't. I advocate keeping kids who need them out of the high-traffic areas. Take turns sitting with them in the hotel room or escorting them to local attractions with fewer people (by a factor of ten).

7) We left our boy at home with my mom. We thought about taking a 14-month-old to DragonCon before we sobered up.

8) Much thanks to the Hyatt Regency for spoiling those of us relocated to the Omni because of delayed renovations: free shuttle service, free Marta passes, a free night at the new place, and priority confirmation for next year's con. I had rooms for the 2012 convention at the 2011 rate four days before the con started.

9) If you find yourself at that Omni, skip the room service breakfast prices and walk to the CNN food court around the block. Also, consider getting lunch at Pittypat's Porch on the Andrew Young Boulevard. It's not far at all from the con, and the food is great. They were very friendly toward the convention folks.

10) The Android version of Google Maps gets a mite confused in the heart of downtown. But it was better than the scrunched and pixelated map in the official convention booklet. Our hotel gave out a downtown map, and we relied on that to get to the con and the parade.

11) If you haven't gonen to DragonCon, go. Go in costume. It's more fun that way. Join the party; don't just watch it.
Posted by Gregory at 12:09 PM No comments:

This is THE picture of the show.

Thoughts to come later. Now, to bed. See all my pictures here.
Posted by Gregory at 8:28 PM No comments: