The NC Comicon was a roaring blur for three days. I have never been so busy as Saturday, and a large majority my sales went to cosplayers for a discount. I can’t say they bought my stuff because of the discount, but it didn’t seem to hurt. I spent Friday night and Saturday morning working on commissions while listening to every second of MSNBC’s coverage of the Paris attacks. I drew a Deadpool for catharsis, and it was quickly bought by a kindly patron.
Look at the demographics of these pictures. This is completely indicative of what I saw between two wire-frame columns bookending my table – families, packs of friends, lots of happy folks. There were a few exhausted and overwhelmed little guys, but a two-minute Spidey sketch cheered them up. Spidey’s good for what ails ya. I even found new Lord of the Rings figures for The Deputy.
This was my first time in downtown Durham, and it’s easy to love the town. Nice variety of eateries along a pedestrian-centered layout. Right around our the host hotel was a cupcake bar, and I practically jumped into their kitchen to swim in a tub of cupcakes. The costume dance party was fun; they had ‘80s arcade games and a change machine, and Q*Bert is harder than I remember. If they had Burger Time, I might still be there. It gave me a chance to bust out my Littlefinger costume one last time for 2015.
Come to this show. The organizers have a army of henchmen to help everyone navigate the con, and they pampered the people behind the tables too. I’d sign up for the 2016 con right now if I could.
Posted by Gregory at 1:05 PM No comments:

I'll make my NC Comicon debut next weekend, and my commission list is open. You can place your order online and pick up your art at the show by going here. Prices range from $10 to $35.

Posted by Gregory at 8:42 AM No comments:

Order the art you want below or commission new art here. 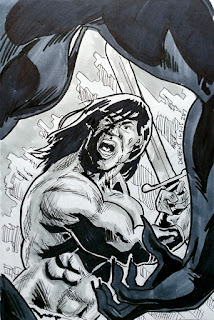 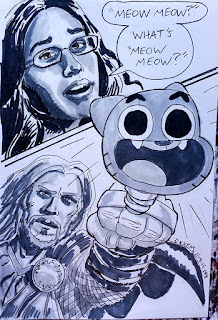 Posted by Gregory at 1:27 PM No comments: