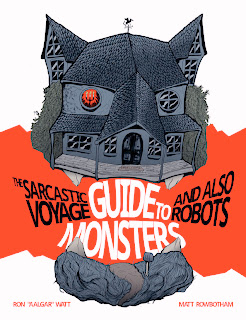 For the Sarcastic Voyage Guide to Monsters and Also Robots (buy it here and now), I submitted the artwork for the zombie listing. But of course I otherthunk it and made it an astronaut zombie.


Once I had my notion for a zombie in space (excuse me: SPAAAAAAAAAAAACE), I thought of the apocryphal stories of "lost cosmonauts." These alleged secret Soviet missions were hushed up by the state when they failed, but some outside Mother Russia claimed to receive SOS transmissions from stranded cosmonauts. If you're a frazzled Soviet dictator struggling with a burgeoning zombie epidemic, what better stone to kill two birds than getting rid of the infected while testing Soyuz technology. Because those stories were from the height of the space race, my astrozombie would be in a Mercury capsule -- Gemini, if there were two of them.


An early sketch of astrozombie/necronaut reaching toward the viewer was declined, and the sketch of a forlorn zombie looking at earth -- an astronaut in the fading last moments of clarity -- was OKed. 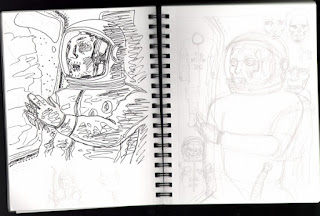 From there, I Googled early NASA suit designs and drew up the image in an 11x17 board. 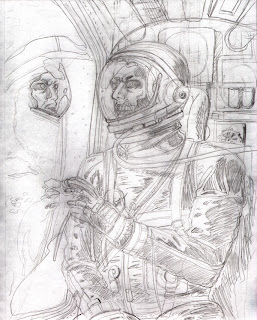 The capsule interior was inspired by actual Mercury designs, but I improvised quite a bit. 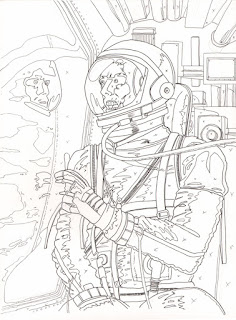 I then lightboxed that art onto another board, tracing the pencils lightly, and going over those new pencils with Micron pens. 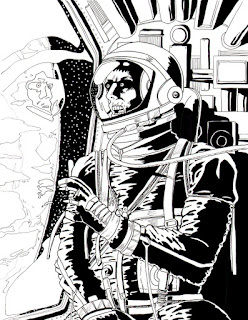 I filled in the blacks in my traditional heavyhanded manner and scanned the image for color. 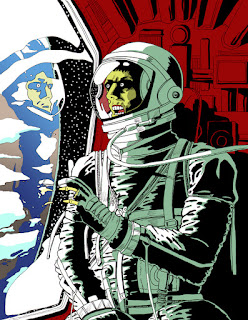 I digitally tweaked some inks and colored it in Photoshop.

I was flattered to be asked to submit artwork, and I hope they consider it an OK submission.
Posted by Gregory at 1:47 PM