Here, finally, is the cover to this year's comic from Robot Wonderboy. It took much longer than I thought and evolved into an image better than I could have hoped.

I drew the cover last, after plowing through the scripts, thumbnails, pencils, inks, and letters for the comic.I didn't even sketch the cover until the comic was done. I wanted to have the finished story in hand to inform me what the cover should be and how best to sell the comic.

It was originally called Black Jenny, because the former SCRAP champ was the engine driving the comic, and the title would follow the template of Focus and eMMA; each comic centers on the title character. 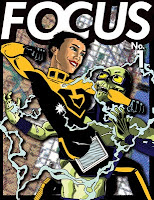 I played with the idea of recreating a famous cover, making an homage to one of my favorites. 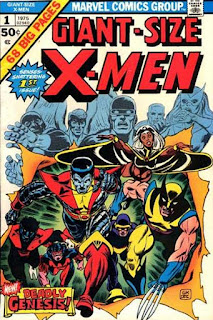 Jenny and her SCRAP cohorts would bust through the cover to the eMMA comic. 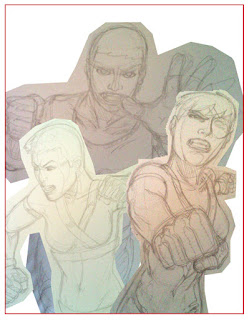 I worked on this one for a good while, playing with poses and compositions, before I decided that a Black Jenny cover should feature only her, and that lead to a very simple image. 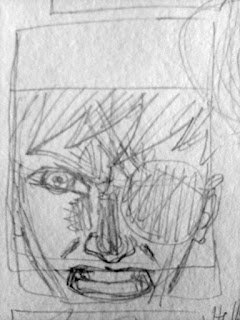 This sketch is maybe 2 inches tall. I thumbnail small to ignore concerns about detail and find a simple walloping image. But somewhere along the way, the image expanded. I thought a gloved fist would inform new readers that this was the face of a fighter and not, say, an angry pirate (even though Black Jenny was always a pirate-y name). 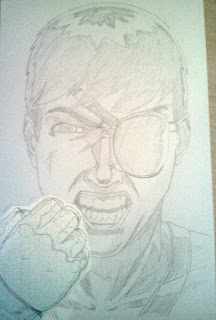 This was the first penciled cover image. I drew the glove on a second piece of board and layered it onto the "mughsot" in Photoshop. This allowed me to adjust the size of the fist if need be. Off we went to color: 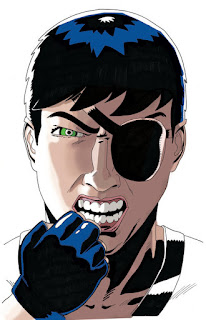 And it didn't look right. I wanted a specific color style -- a direct, unseen light source, creating a darkening effect. It would make her shadowy, tell us she's not a good guy, and she's gone into a dark place. But either my coloring skills were withered or, I decided, the artwork was wonky. I redrew the image. 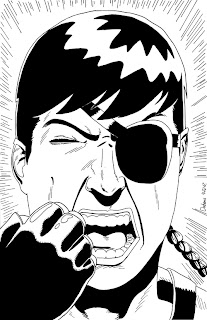 Different angle, different expression. Almost immediately, I had reservations about this. I wanted her eye open to show it was robotic. A small detail, but necessary I thought to say she's an angry, female, robotic fighter. But the linework was stronger, and it conveyed more emotion. Give and take, I thought. And off to color a second time: 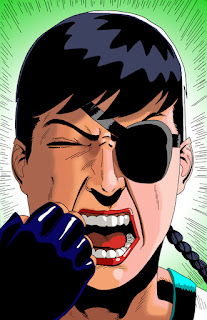 And it was ... okaaaay. But not the whiz-bang image that makes someone pick up my comic. And as I approached the time to add the necessary cover elements, I realized the size of the head left little room for the logo. 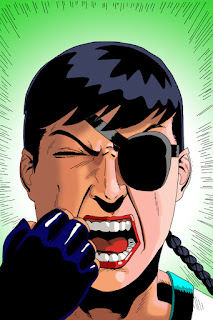 SHRINK-RAY! I shrank that head and recolored the face and thought, well, it's better, it's kinda what I had in mind, and we're nearing the deadline to send the comic to the printer. Let's finish up. 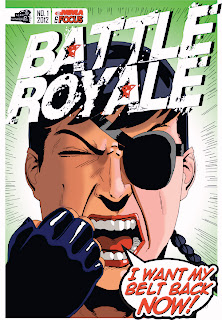 The Black Jenny title gave way quickly to Battle Royale to help sell the fight story (this comic is 80% fight scenes), and I for sure wanted a word balloon on the cover. That's a lost art as many comic covers have abandoned the idea of selling a story and have become pin-ups. (In the defense of cover artists, they may not know what the story is when they're hired to provide a cover). And while I was happy to be near the finish line, I needed to fix ... something to make this cover strong. 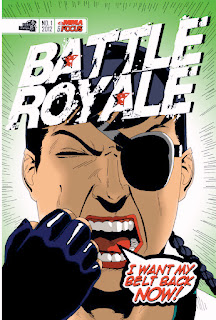 So let's recolor the face yet again. Give her two light sources, maybe. Play with the word balloon. Yeah! It's moderately improved! It's ... it's ...

Oh, God, my cover sucks. And I want to send this book to the printer tomorrow. This isn't gonna sell, and I will have wasted all this time and undersold a good story. A really good story. All because I can't bring it for the cover. Am I exhausted? Why doesn't this look more like that first sketch I liked?

Where's that intensity? Where's that pow? I want that pow. I want to make that pow happen.

Screw it. ALL HANDS ON DECK. WE'RE MAKING A NEW COVER! DUST OFF THOSE OLD NEWSPAPER ILLUSTRATION SKILLS! 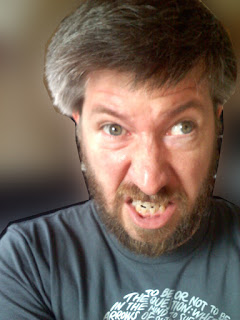 OPEN IT IN ILLUSTRATOR! DRAW IT UP RIGHT! 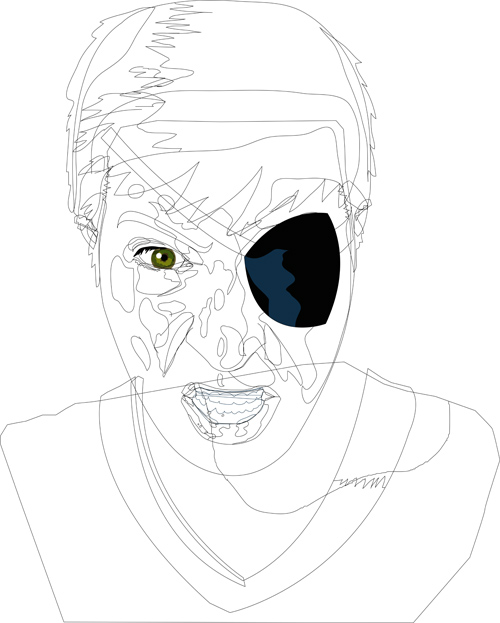 FIX THOSE TEETH!
ARCH THOSE EYEBROWS!
THINK ABOUT GETTING A HAIRCUT! 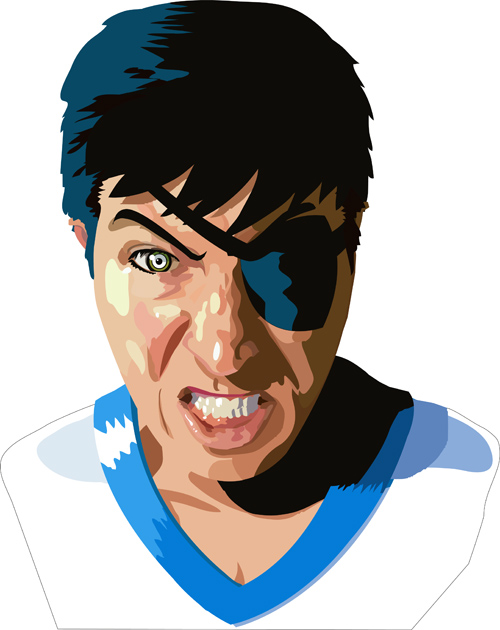 And hokey smoke, people, we got a cover goin' on over here.

Trivia: I never considered the color of her outfit until I had to make this cover. She's always appeared on b/w pages.

Instead of that background color gradient (which makes her look a little too much like she's turning into the Hulk), what would be a good comic-ky touch? She's hopping mad, and we're finally conveying that. What would sell it more? 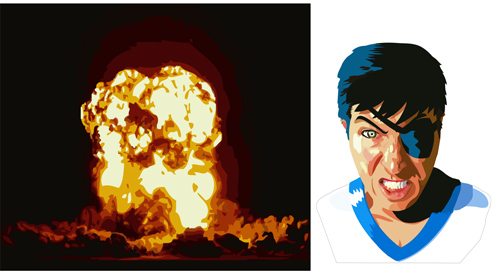 I found a stock photo of a nuclear explosion and recreated it in Illustrator. And now to combine those cover elements. 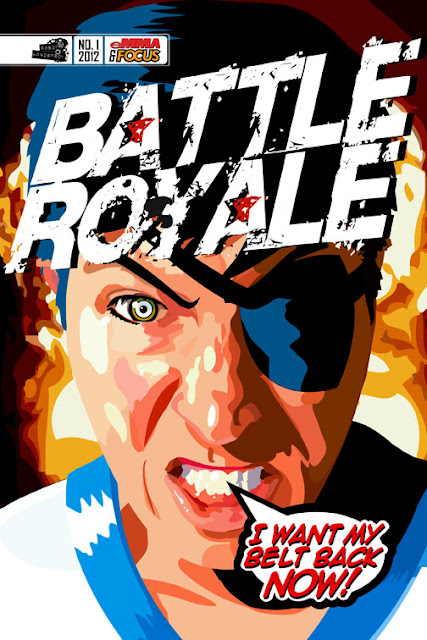 And just for fun, here's the whole cover without color. Each of these outlined items were either hand-drawn or manipulated on the computer. 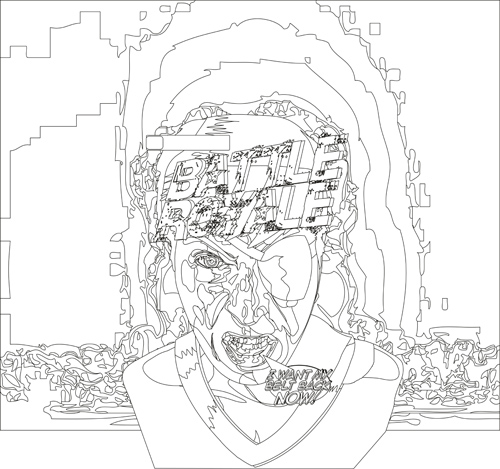 Battle Royale will be on sell in early June, right before it's unofficially official debut at HeroesCon in Charelotte. Click here for details on how you can join the early-bird publication list.
Posted by Gregory at 7:19 AM