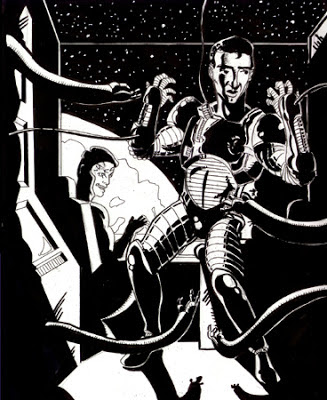 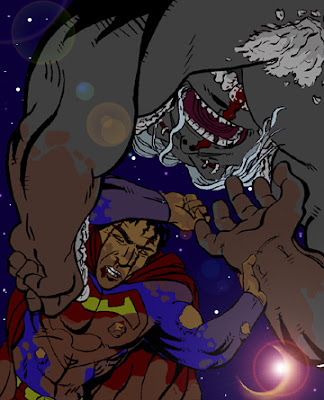 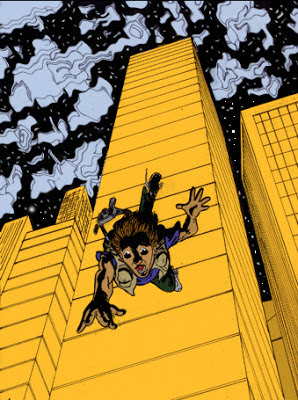 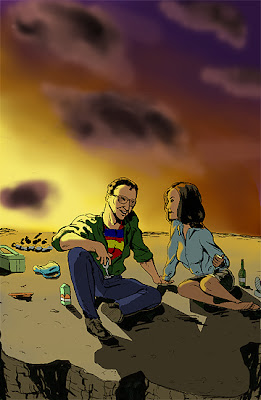 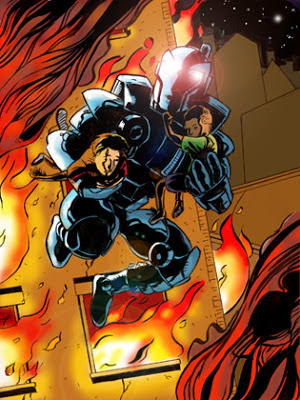 I have a workshop. I have a drawing table. But I also have a toddler. So I haven't seen the first two items in a while.

Instead I draw in the house proper where I can watch over the deputy. Here's my kitchen workplace. 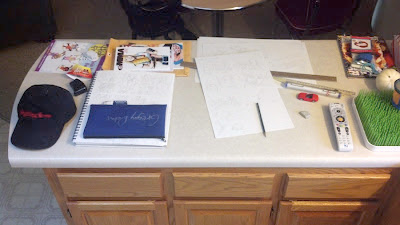 The hat is for art reference. I won it from RollingStone.com in a name-the-band cover contest. The red car is also for reference. At this counter, I can see the deputy watch cartoons for hours on end. Makes for an un-fun work soundtrack, but I don't have the usual temptation to watch the TV while working.

The deputy was sick for a few days, so I got some work done. This is a week's worth of pages. 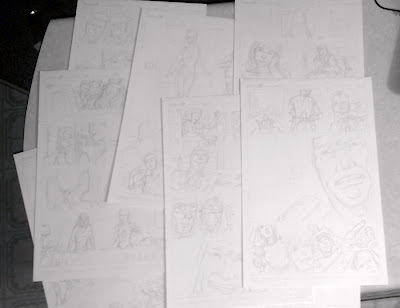 These pages feature a lot of blah-blah, setting up the following 20+ pages of rootin'-tootin' action. This is the Big Bad monologuing.

And this is when the good people of our fair city realize something bad's coming their way.

POINTING!
Posted by Gregory at 10:03 AM No comments:

I sat in on the Post Atomic Horror, a comprehensive review podcast of all Star Trek TV episodes, on Saturday. Hosts Ron and Matt are now onto season five of Next Generation. The two episodes I spoke about are ones I hadn't seen much of. I do remember at least one of them ("Ethics") when it originally aired. TNG was a big deal in my high-school circles, and we watched them religiously. But by the time season five rolled around, I was in college and couldn't watch the show as often. The podcast is online now.

It was great fun to do, and I signed up for another podcast in April.
Posted by Gregory at 7:42 AM No comments:

I just finished the thumbnails for the 2013 comic to debut at HeroesCon in June. It came out to 24 pages much to my surprise/delight/giddy relief.


Here's my thumbnailing set-up. I have my typed script grouped in loose panel breakdowns but not in page increments. I play with page grouping, and my only concern here is the page count. I try to keep each page's eye-motion moving in the traditional Z pattern, but I break that for dramatic purposes. Each sketchbook page holds 12 thumbnail pages with just enough room for script notes in the margins.

I was at page 14, thinking I was gonna have to cut scenes, but I drastically changed the big hero moment for Focus, my lead heroine in the Sinclair city hero group.This meant I pretty much chucked the script after that page, but I did meander back to where I wanted to go, and I arrived at a dandy last page  that hit me out of the blue.

I intend to group this comic and the previous four Sinclair comics into a trade to get it into bookstores, and I aimed this story toward a good conclusion. I also wanted to try some panel tricks and camera angles I couldn't pull off before. If I never make another Sinclair comic (or any comic period), I can look upon this with pride.

I'll let this sit for a day and check it again with fresh eyes and adjust the comic if need be. Otherwise, I move onto the full-size pages.

I even have a cover idea, and that never happens this soon in the process. Beans and rice.
Posted by Gregory at 11:17 AM No comments: 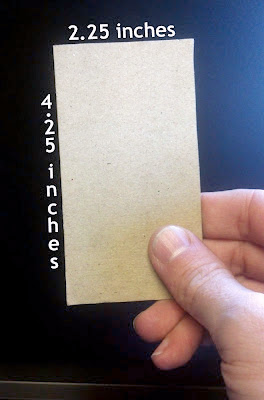 This is my page template. I used the same template for both 2012 comics, and it works great. I trace the template outline and sketch my comic inside the reduced, proportionate page dimensions. Hopefully the comic will be thumbnailed by the beginning of next week. I'll let it sit for a day and look at the pages with a fresh eye before starting the full-size pencils.
Posted by Gregory at 1:50 PM No comments:

As the Lee/Kirby character rejoins the Fantastic Four comic, I was inspired to work up a drawing. I cannot draw hair, and that's somewhat important for a character whose power is hair-based. 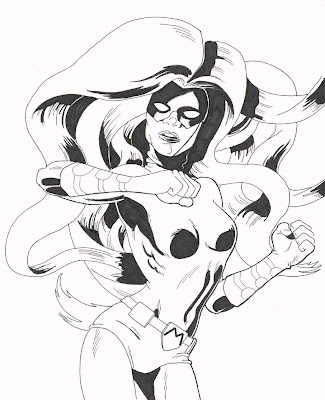 I'm hoping to do a drawing every day of 2013. It already sounds exhausting.
Posted by Gregory at 8:50 AM No comments:

A quicky pencil drawing made somewhat palatable with clean inking. 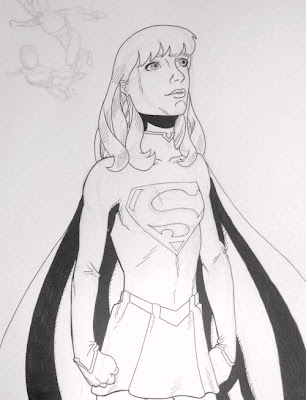 Posted by Gregory at 9:08 AM No comments:

Done in one afternoon as my son watched some Thomas the Tank Engine. 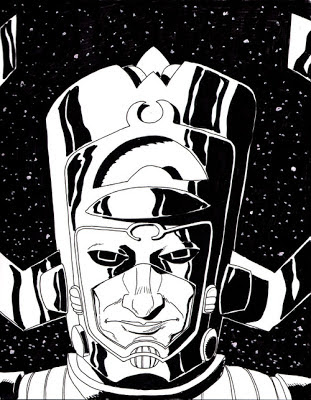 Yet another Illyana drawing. The last one was back in July. This one is more better. 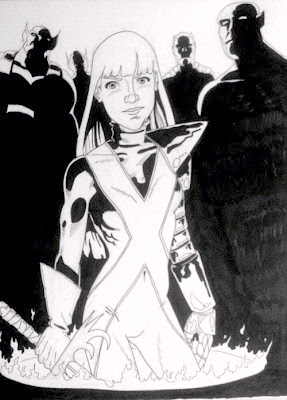 Posted by Gregory at 9:04 AM No comments: