Yeah, About That New Comic Title ...

Last Thursday, I posted the cover for the new comic and the process behind making it. It was revealed as Battle Royale. 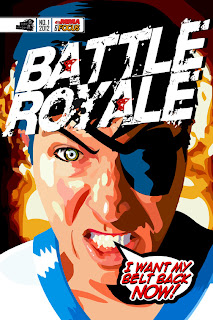 I think I know when the hiccup happened. When I played with title fonts, I was struck with the symmetry of both words ending in e, and even if I thought about changing that for the correct spelling of the pronunciation in my head, the discrepancy didn't register. And I worked on this thing for a few weeks with no quibble. I may have been triggered by seeing the term "battle royal" in the most recent WWE video game.

And let us not neglect the very large already existent Battle Royale series from Japan.Why on earth would I want to confuse matters by sharing that title? Especially when I can cut the e so easily? 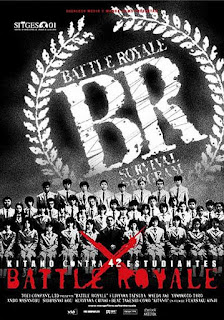 In any case, it nagged me. But I had already sent the comic to the printer. A quick look at my online print progress showed the comic was still in a holding pattern. I contacted them and asked to make a change to the front cover and the inside front cover only. They said it wouldn't affect the shipping date or the price. I quickly made the change and sent it along. 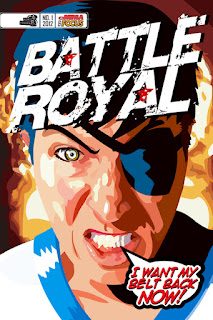 And the comic will now be known as Battle Royal, as it always shoulda been.

Feel free to collect the previous blog post as a pricy rarity like Revenge of the Jedi material.
Posted by Gregory at 12:48 PM