As of yesterday, I finished the initial thumbnails for next year's comic. Currently, it will only be one comic but will closely tie in to the previous Focus/eMMA comics. It'll be bigger in size and action, a big blowout episode. The script thumbs out at at least 33 pages, and that might expand as I inflate the fight scenes. The little scenes, I mean; the whole comic is practically a fight scene.

These are the thumbs, sketched on the 7x10 paper, making each page sketch about 2 x 1.5 inches. I want to check panel layout, camera movement, and beats. Make sure my characters hit their marks. 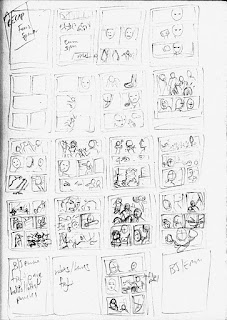 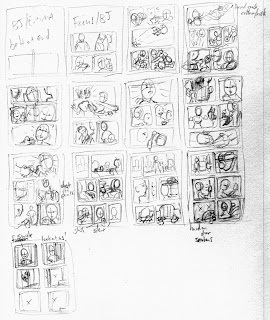 The script will need tweaks, the first of many all the way up until the book is sent to the printer. The recent theme artwork has my drawing brain segment confident I can draw whatever the writer brain segment has cooked up.

The first scene of the book came to me as I mowed my lawn a few weeks after I attended an open house at the local fitness center. It's also dedicated to two longtime friends of mine who teach fitness courses. So I need to get those pages right or they'll make me workout until my joints pop off.

And now that I look at the pages above, the comic doesn't seem that big at all. I think I'll tightly choreograph the fight scenes and stretch them out.
Posted by Gregory at 6:52 AM