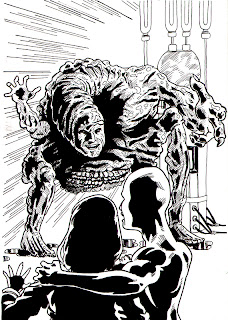 This one may not be as familiar. I'll explain.
Right after the success of his Re-Animator adaptation, writer/director Stuart Gordon was asked to pursue another HP Lovecraft film. From Beyond was chosen. Unlike the Re-Animator stories, From Beyond is maybe five pages long. The gist makes it to the screen though:

In the story, the unnamed narrator explains how his friend built a machine called the resonator that expands our perception of the spectrum. It also breaks down dimensional barriers, and creatures cross over. People disappear, the inventor dies, and the narrator is driven insane. The end.

In the movie, all that happens before the opening credits: machine, creatures, death, institution. From there we get a story of fetishism, liberation, addiction, and monsters. Turns out the creator wasn't killed despite his head going missing. Instead, he merged with the monster that chomped his brains, and he's developing control of the resonator "from beyond." When it's on, he and his menagerie can cross over to call dibs on a planetwide brain buffet. This goes to the core of Lovecraft mythology: man discovers he's nothing compared to the violent mysteries of the universe.

So today's image is of the inventor as he again crosses over. Each time he does, he loses more of his humanity, and his appearance mixes with that of the giant bug that ate him (designed by comics legend Neal Adams and inspired heavily by William Blake's Red Dragon, yes, the same creation used for the Thomas Harris book and films). 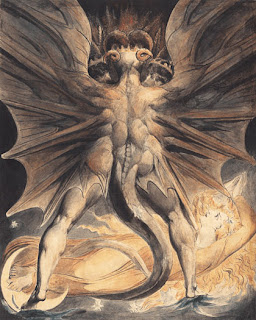 Our heroes get the double whammy of seeing his incremental distortions along with their own dissolving sense of reality. It's a fun movie. Very gory, but not so much bloody. Not for kids though. Tuck them in first.