Despite the curse of a roman numeral title, Exorcist 3 is a great horror film.It contains a scene that never fails to spook me.

It should have been titled, at worst, Exorcist 2, but that was used for a studio-penned sequel for the film based on William Peter Blatty's novel. Blatty eventually wrote a true sequel titled Legion, a title that should have followed the book to the screen.

Fans of the original book and film will remember Lt. Kinderman, the detective investigating the death of the drunken director friend of the possessed girl's mother. In Legion, Kinderman is the main character, now pursuing a string of deaths seemingly related to a serial killer killed more than a decade ago. That search takes him to the psychiatric wing of the local hospital, and what he finds in a padded room dramatically alters the investigation and his burgeoning theory of the universe, a cosmology that can make sense of a fallen world.

I won't spoil it for you, but Exorcist fans will recognize the mysterious patient as quickly as Kinderman. 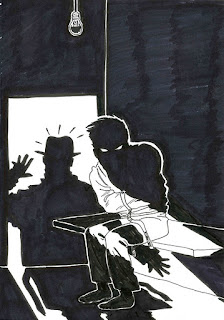 Did you know cartoon "surprise" effects cast shadows? Neither did I.