I waited more than 20 years to see this film.

I first read Stephen King's Skeleton Crew, an anthology that lead off with 'The Mist,' when I was at most a high-school freshman. My Mom got me stared on his works when handed me a copy of Night Shift from the library; she didn't care for it. She must have noticed my interest in UFOs and ghosts and "real" monsters and figured the King stories couldn't be any worse than the same three books I religiously borrowed from the school library.

'The Mist' is the longest work in Crew, benefiting from the extended format but eliminating tangents to stick with the premise: a fog enshrouds a small Maine town, trapping our characters in a grocery store, and monstrous things are emerge. Great story, great ending, ill-fitting sex scene seemingly tossed in to attract publishers. I avoided the audiobook (advertised in a 3D audio format) because I assumed it wouldn't match my internal version of the novella.

But when I heard of the movie, I was immediately curious, and I happily followed the vague backstage diaries posted at Ain't It Cool News. Matt Drudge, ever the dick, ruined the ending on his website, but I went anyway, curious how the film story would go where the novella didn't. I like it, I admit, because, without spoiling it the movie, the new ending is scarier for its implications. King himself said he would have used that ending had he thought of it. But I like King's original ending; it was the right kind of ending teenage me could accept.

My favorite mental image from those reads is the encounter with the giant monster, something so big that they people in the car could only see its legs stretching skyward until the fog enveloped them. The movie gives us a slightly different version of that scene, and I decided to mix the two. This image makes the big monster bigger but still visible to the passengers.

If you get the chance, watch the black/white version of the film. It's better.

I hadn't used hatching to this degree in years. We were discouraged from using it in my university art classes, and this style is a nod to the kind of technique I would have used it had I drew the scene back when I first read the story. 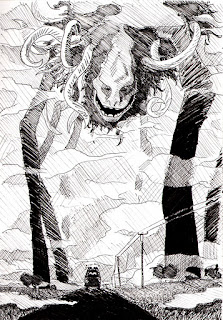 Email ThisBlogThis!Share to TwitterShare to FacebookShare to Pinterest
Labels: worth the wait