When we last spoke, I had sewn closed a pocket hole. I had never sewn/sewed/sown/stitched before. Between that momentous moment and Aug. 27, I am hoping to make a Game of Thrones Littlefinger costume for DragonCon. Much like stepping over a speed bump in preparation of climbing Everest.

I knew this was a lofty goal. I tried to make it easy. Instead of making the base layer, I bought a Matrix Neo robe. That left me with making the "Celtic poncho," strip belt, and maybe that little pouch (probably not; it'll get walloped by convention crowds).

Not long after fixing the pocket, I spoke to my wife, The Countess, about my plan of attack. She surprised me with two bits of news:

1) She rented a costume to wear alongside mine at the convention.
Not a specific GoT character, but it would be a genre/period-appropriate dress. Originally, she was going as Elasti-Girl from The Incredibles. This change is good. We could walk together in the parade and pose for pictures together. I'm all for this.

2) We would have access to a sewing machine.
After a quick rush of relief, I froze. While this would surely make the assembly easier, it would only do so for someone who knows how to use it. I don't. I threaded my first needle and knotted my first thread last week. I knew "sewing machine" was a good idea in the abstract, but if I encountered one in the wild ...

Who in the house knew how to use a sewing machine? She did.

I had an idea of how this costume project would go, and it didn't include handing it over to my much more skilled wife unless my hands fell off. I knew it was a possibility that she would save my Littleass when calamity befell. That was a 50/50 chance. I told her I would only come to her for help if there was enough time for her to help. I would not throw her a pile of cloth the day before the convention. But I had every intention of doing this myself.

I showed her my notions of making the costume. I cut a pillow case in half to show here the two types of folds I had in mind. She suggested a way to make one set of those folds, and I realized we were heading into a higher level of costume fidelity than I wanted. It's not realistic to recreate the costume exactly. Not with my skill level. I had already simplified the fabrics in consideration of the Atlanta setting. The costume would be lighter and cooler. My mantra for this project is "represent not replicate." She, however, has a higher standard for everything (except spouses), and that's when we had a yelling argument. Over a costume. Because I am a moron.

Jump forward an inexcusable amount of time, and we made up and agreed to tackle this in a more deliberate fashion. I would work up what I could in the design stage, show her what I had prepared, and she would advise on the feasibility of the blueprints.At this point she had not seen in person the fabric I picked or the many reference pictures I had gathered. It was all verbal and half-understood on both sides. Let's start fresh tomorrow at the fabric store, agreed? Agreed.

The next morning, we strolled that store, looking at the fabric I picked and the ones I had rejected in a Goldilocks fashion. She seconded my pick and my reasons, and I felt better about my level of progress. She suggested an amount of cloth to buy and extra tools to make the costumes. I picked out a sampling of cloth paints for the costume accents. 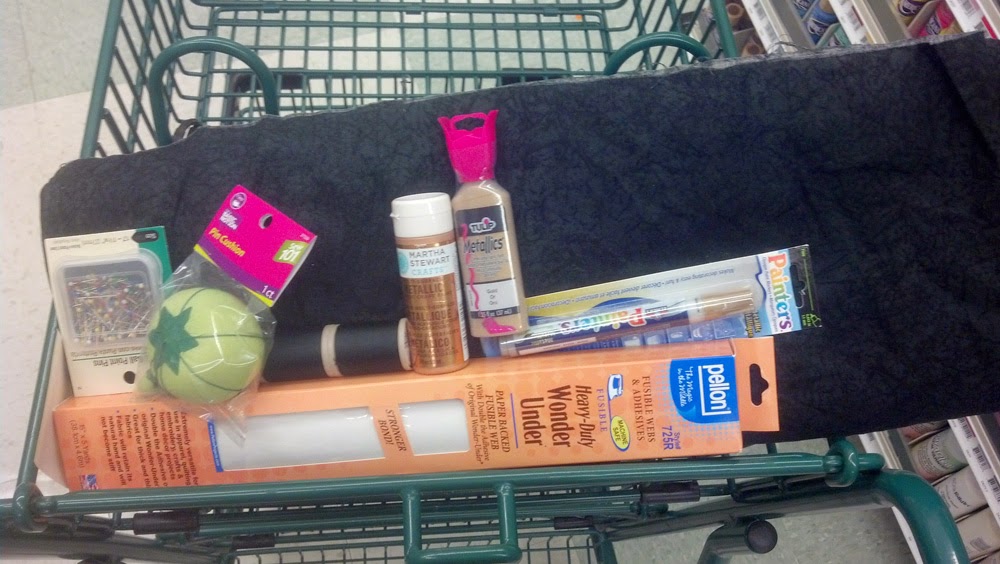 That night, she hit the Googles. I told her about a Littlefinger costume webpage I found weeks ago. It was heavy on the costume ingredients but not the recipe. The Countess took a different tactic: We needed a patter for the "Celtic poncho," but its a piece of clothing easily found elsewhere, like Jedi costumes, and there were online tutorials for those. Also, that item has a name: a tabard.

She studied more costume reference photos, and she found an image that caused me trouble early on. 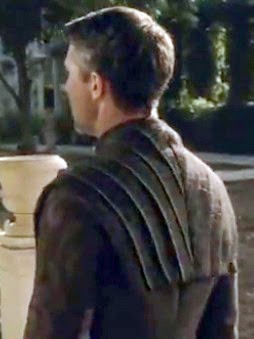 I decided to adjust the costume to make the back symmetrical with the front. My ideas for making this half-back seemed to lead inevitably to quick wear and tear on the robe beneath it. She had a new idea that made a lot of sense, and combining that with the Jedi tabard, she worked up a pattern. 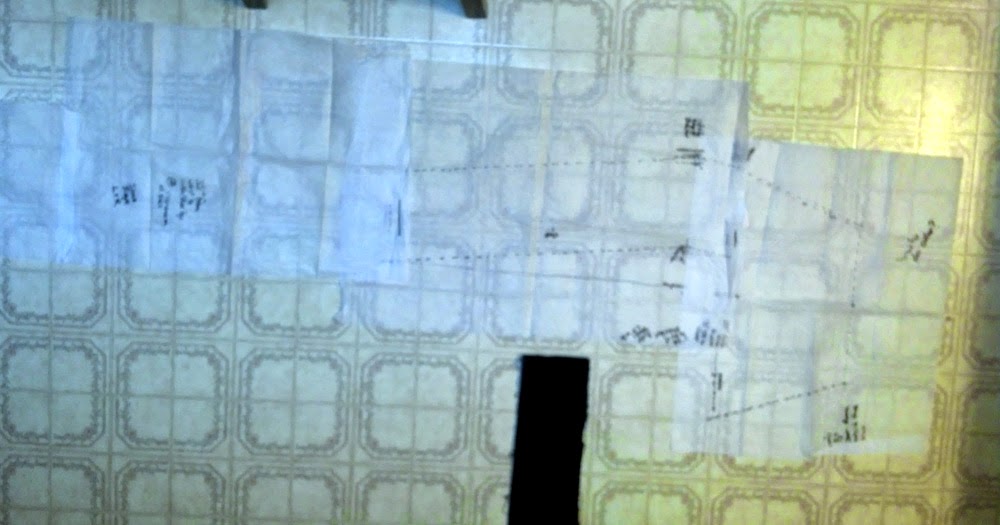 She measured me and sketched it out on tissue paper, and then we brainstormed construction ideas. The picture again created an issue right behind the neck. What if, we thought, we don't worry about filling that area between the shoulder blades and extend the vertical panels to the back? Or make one long strip of fabric and wear it like a very loose scarf. She didn't quite see what I was describing, so I grabbed a pair of jeans and wore them like the tabard. That showed her what the back panel might do.

Then we cut some fabric and pinned it together. Her idea was to make a tube. 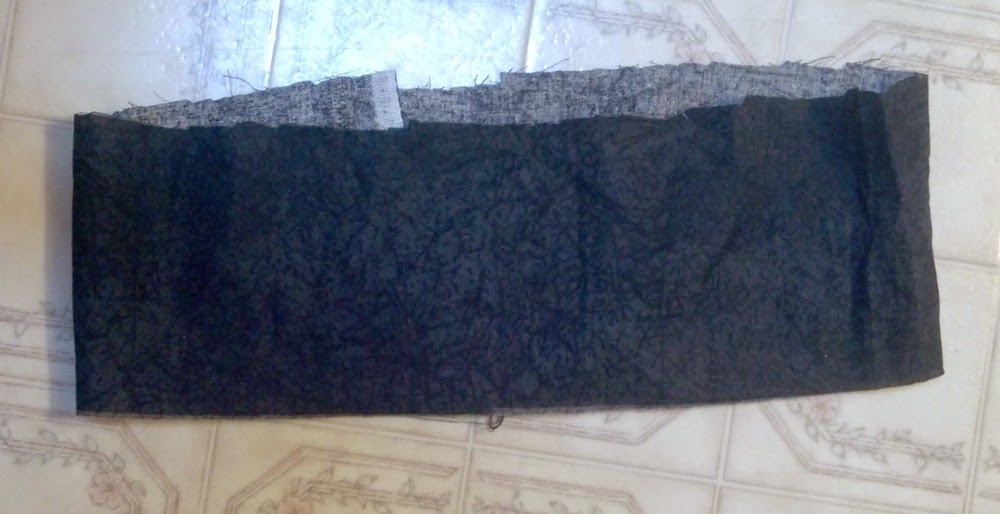 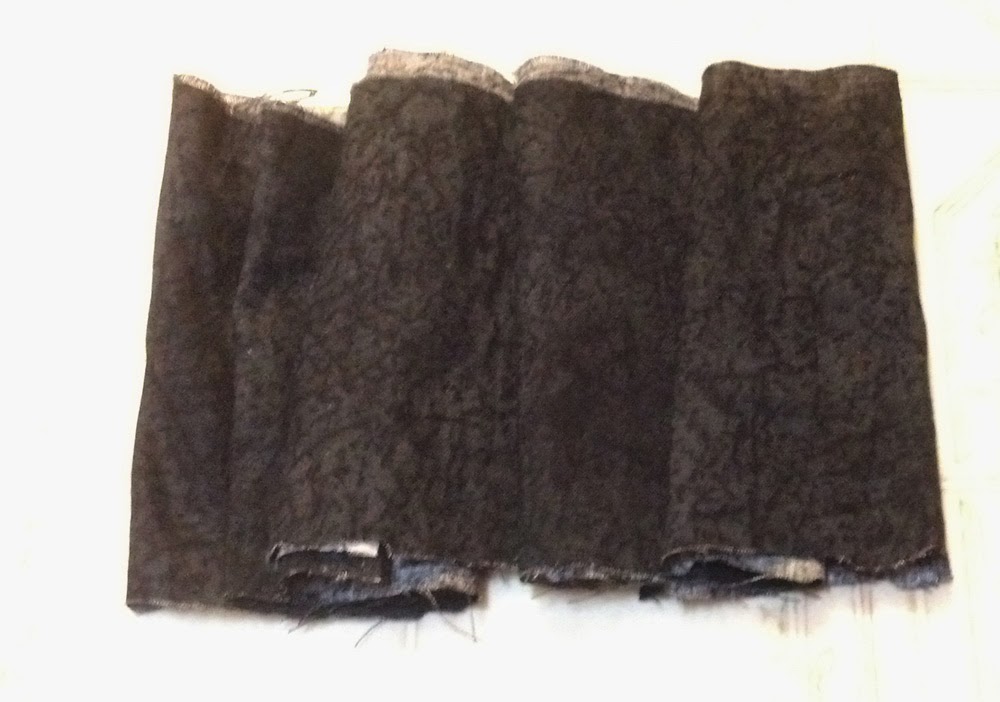 This is a very loose example of the folds, but you get the idea. I then would add the gold accent dots on either side of the flaps, and the tabard is done.

We seem to have plenty of fabric to work this up (and use some as scrimmage), but for now we're letting it simmer to return to it with fresh eyes. We're getting there.