When last we chatted about the Friday cover redesign, I declared that I was gonna aim for two covers. One was a minimalist design that veered away a detailed depiction of the title character. The other went the opposite direction and gave us a scene right out of the book. 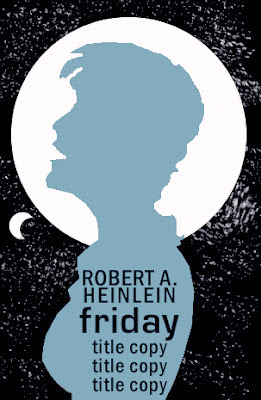 The minimal design was sketched out on a lunch break and recreated quickly in Photoshop (above). Since then, once I decided to go with the blue design over the orange, I did a tighter version in Illustrator. (Why blue? I dunno. Maybe it's a nod to her denim jumpsuit. I just like it.) 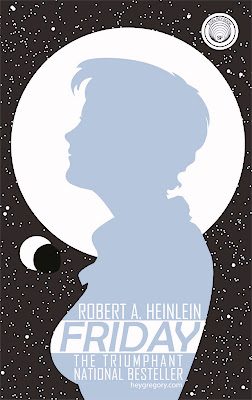 This really works for me, even if it breaks my first criterion of the entire project: present the character closer to her novel description. But because the book is relatively vague about her look, I figured this style allows the reader to project their own vision of Friday while reading. I think the star field and planetary profiles sell the scifi elements, and the uplifted head implies contemplation, specifically of one's place in the universe. Friday yearns to belong. I wanted to suggest that. I kept all the text from the front cover of the paperback I own and recreated the Del Rey logo but reversed so it can double as another moon.

The Missus, however, voted for a more specific cover sketch and even posed for reference photos. I decided that cover would be more in line with the pulp style of the book -- this is a global spy caper with the usual Heinlein tangents. 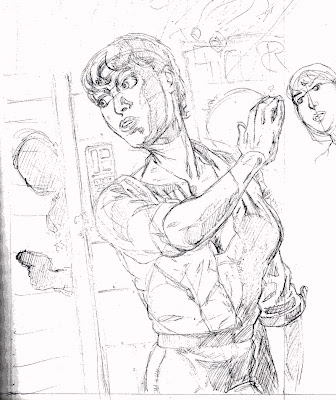 I based the photos on a shot that kinda-sorta shows us a few scenes of the book at one time. Friday doesn't use weapons in the book, unfortunately for my purposes, and she takes down many an opponent with a superchop. I cranked up her arm for the swing and avoided a limited depiction of her pursuer/antagonist by reducing him to shadow. At least for now. That might change.

I worked up a tight sketch to noodle through the fabric of the jumpsuit. It's denim in the book, and The Missus's jumpsuit is whatever Air Force pilots wear. I also considered the scene elements that would show us the futuristic setting: a door panel, a space cruise advertisement. It's a pretty good start for this second cover.

Which is good, because I now have an idea for a third.
Posted by Gregory at 8:57 AM