And here it is. 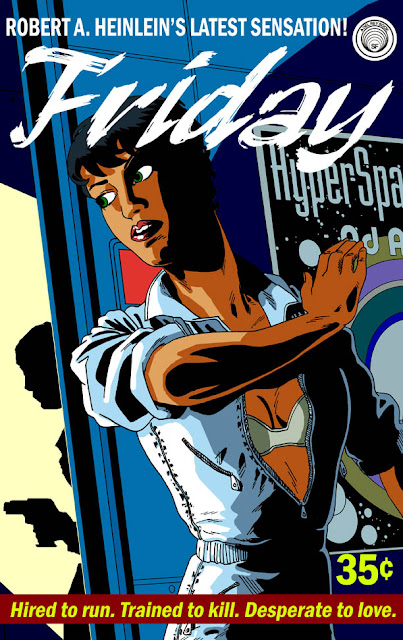 I showed you the inked figure yesterday. (Look to the right sidebar to see the other entries for this cover redesign project.) From there I had to make the background. 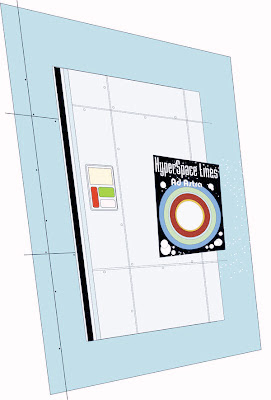 Based on the sketches, I knew what angle the walls should be. I made the background flat in Illustrator -- just rectangles atop each other -- and then distorted them to match the sketch lines. 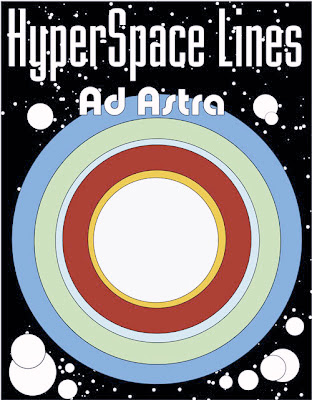 The poster is based on the cruise line from the last quarter of the book, and I turned the Grand Tour planet itinerary into concentric flat circles with moons in collective orbit. I didn't get too detailed as it would be a background element, and I knew it would be mostly obscured (It's also a nod to the minimalist cover I made earlier this month). 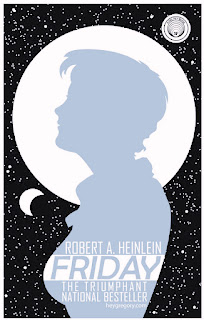 I like to think the pulp cover is the moment before the book's beginning with a set detail that foreshadows the book;s end. At this point, I had the figure and background, but the trick was going to be the coloring.

I looked to real pulp covers for inspiration/reference/outright theft for type and palette.

I opened the cover art in Photoshop and pushed the background shadow foreward by boxing him in a strong light source. Now we're suggesting three rooms: the one Friday is in, the hallway outside, and the room from where the light is projected. 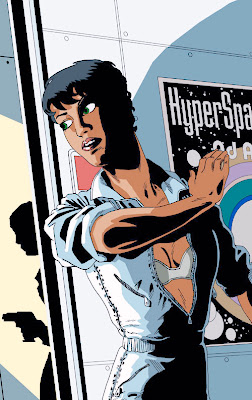 Here's the cover as I insert the angled background and add the shadow and light source and colored her.  I cut and moved the shadow pieces a little to better sell it. I added a shadow for Friday moving in an opposite angle as the light box, making three cover angles: the light source, Friday/doorframe, and her shadow. (I knew her shadow would bury the cruise poster, so I kept its colors muted.) But it looks simple. It lacks mood or tone. I decided to add a color screen over the cover. I went with blue to counter her complementary skin tone. 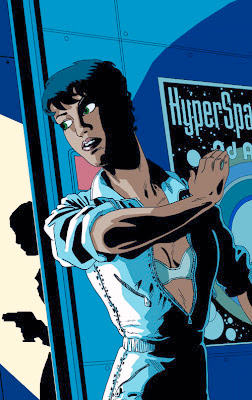 But that pushed Friday into the background too much. This is the full-cover screen, and we lose her. The image is flat. I cut her out of the blue filter for the cover. Just for kicks, here's what the cover looks like without line art. 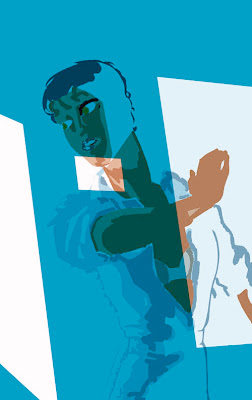 That almost works better than what I chose. I shouldn't have shown this to you. Ignore it. Cover your eyes and yell la-la-la.

With the cover image settled, I imported the image into Illustrator to apply the cover text and Del Rey logo. The title font (Ruach) is a holdover from an earlier minimalist cover design, and the rest is Franklin Gothic. Coming up with the bottom text was the most fun part of the cover (aside from dolling up the missus in the costume, of course). It took ten seconds and was so horrible and perfect that I ran the first blurb that came to mind. Pulp is pop: Go with the impulse and fix it up.

This makes the second pulp cover I've made including the poster for a play I was in many moons ago. 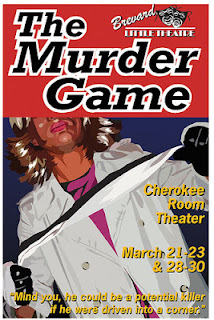 That was made entirely in Illustrator based on a photo taken of a fellow actor in character. Or is that, "actress in character?" I shouldn't say. The mystery is why the block covers the eyes.

Now, let's see if I can crank out that third cover idea I had ...