As I polished the pulp cover of Heinlein's Friday as my National Novel Writing Month project (see how it began here), I considered what a polar opposite style might be. My mind immediately went to "Criterion," the superlative DVD releases. The covers are fantastic in design. Eye catching and evocative. 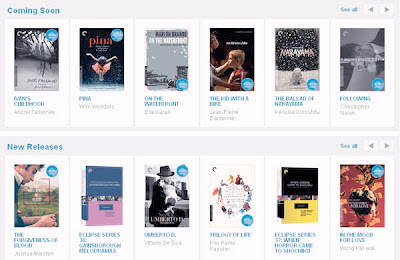 I wanted to follow that standard if possible. I hoped to build a design around some crucial prop from the book, but there really isn't one. Instead I thought about a recurring phrase that defines Friday and her fellow artificial persons. 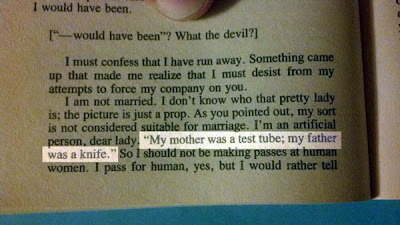 This comes up as conversational shorthand, usually spoken by Friday herself. It defines her. It separates her from the rest of humanity as a lower class of human (or even inhuman). She carries this like a boulder, and she craves the feeling of belonging. Well, therethat gives me two possible props for a cover.

I found stock images of test tubes and lab knives and drew them up in Illustrator, altering them for design purposes. The first cover started OK but felt to me like a Michael Crichton cover, and my initial Friday logo suggested a horror film. I played with that but cornered myself in what felt like lazy scifi design. 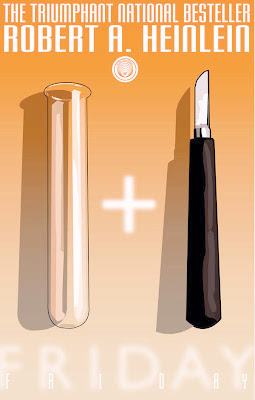 I kept the props but changed the background and played with text placement. I thought bleeding the cover text a tad might suggest a deliberate break with convention, like Friday herself, but it looked gimmicky. Also, I hated the Del Rey button. It was ever in my way. Ever, I tell you. But I liked that fading title. I went with hot pink to suggest the title character's rampant sexuality. (As I said before, the book reads like a female James Bond novel.) 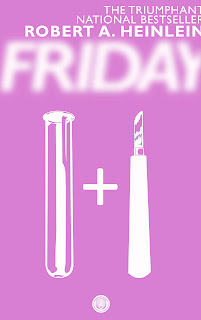 The props lie flat, however, and I decided I could focus on just one and blow it up to abstract the shape without losing its identity. That allowed me to move the title and play with color to make it stand out. 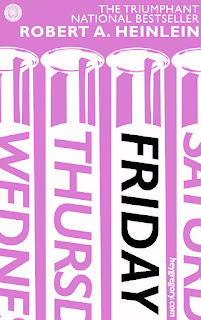 I can't say I'm fully satisfied with this as the novel's cover. But as an exercise in style, I think it's good.

So. Here we are. One month later, and three covers made. 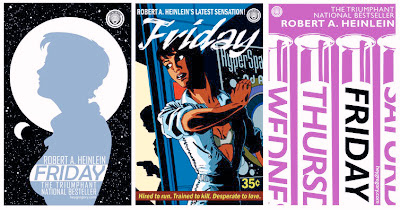 What I call the "pulp" cover is the one I was aiming for initially, and I had three demands based on the original Michael Whelan cover art: a cover figure who resembled the title character; an active pose; and a scifi setting. The other two designs are gravy.


I did more work than I expected, and I could have made the pulp cover stronger had I not diverted to the other two, but I don't regret making them. This entire project was an experiment, and I followed those tangents for curiosity's sake.

I'll do this again next year. I'm sure I will.