As we get a little further into the new cover design for Heinlein's Friday (see the beginning of it here), let's go backward a little bit. 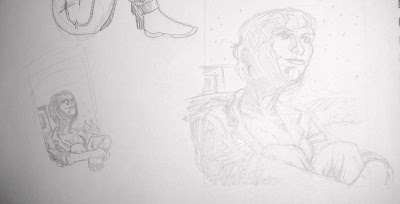 I said the sitting image wouldn't work. It still doesn't. While novel cover images are fairly static compared to those of a comic book, this doesn't do enough to convey the character. It can't move copies off the store shelves, not compared to the original cover with a neckline down to the navel. Sometimes you gotta flush an idea from your brains in order to move onto a better one. The above sketches are on the bottom of the page with the sitting piece I posted earlier. I'm having trouble getting past the Contemplative Friday. Also, I realized I needed to decide on a haircut.

I'm working on the presumption that she has short hair. We're told she only tends to her hair when it gets in her eyes, but that tells us nothing about the length in the back. I'm re-reading the book, and I haven't yet gotten to the chunk of the book where she dresses more formal. She may talk about how she does her 'do, and if so, I can use that for a direction. Otherwise, I'm thinking she's gonna have, at most, shoulder-length hair. She's a courier and must adopt disguises to move past security. Shorter hair makes that easier. Less to tuck under wigs. 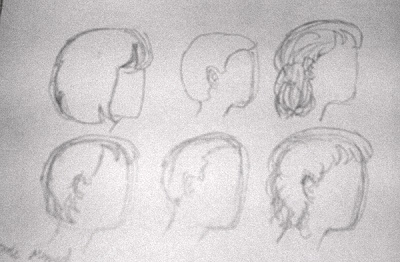 I get to doddlin'. I'm leaning toward bangs. 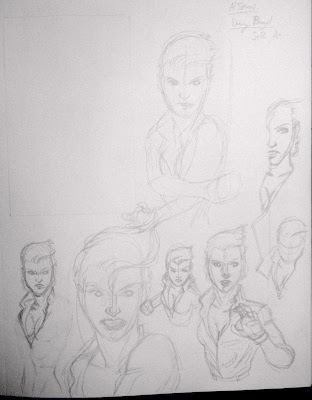 Speaking of moving past security, I considered a Sneaky Friday cover pose, possibly inching up to a corner. This lets me play with dark background shadows which could be interrupted by the spaceship porthole for which I commended original cover artist Michael Whelan. Also, a structure corner provides a stronger sense of setting via scifi wall/bulkhead seams.

I worked up poses based on her leading with a shoulder about to peek around that corner. It also allows me to position her in a crouch to work the neckline.

The neckline contour suggested another design you can see on the top right of the above image.

A dramatic single light point gives us a lot of negative space to work with and makes for a more moody image. I also considered applying a single, flat color to this. Maybe orange. I'm bookmarking the idea for possible later use. Back to Crouchy Sneaky Friday. And that means we go to the reference pictures. 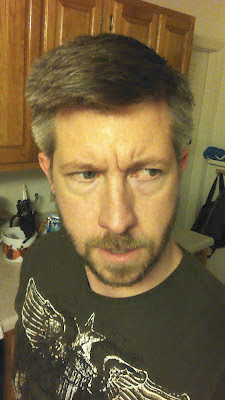 Bearded Friday! It'll sell in the ones.

I'm my best model, and regardless of what you may have gleaned from the many duckface self-portrait photos online, camera timers are easy to work with. For this angle, however, I grabbed my phone. You can tell by the expression that I'm trying to imply movement and intent, something lacking in the original novel cover. This angle makes it easier to dip that shoulder for better body positioning and reveal the neckline.

Don't let my cover criticism confuse you. We shouldn't shy away from the decolletage. The cover image should play up Friday's charms because the character certainly does at every opportunity. It's a practical matter for a courier; security is less likely to look at her face. 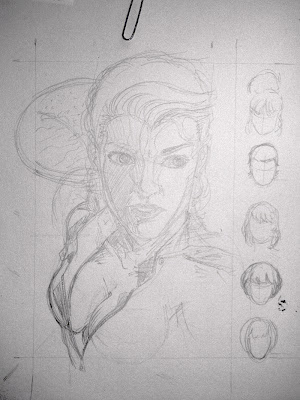 I went large for this sketch, but the borders don't relate to the dimensions of the book. The cover copy would be too close to her eyes. I played with the Whelan porthole, but I wouldn't place it quite so flat in the background as above. You can also see more hair sketches and my inclination toward bangs. I used the dramatic black cover sketch above to guide the shadows here, but they're likely to be subtle, if used at all. 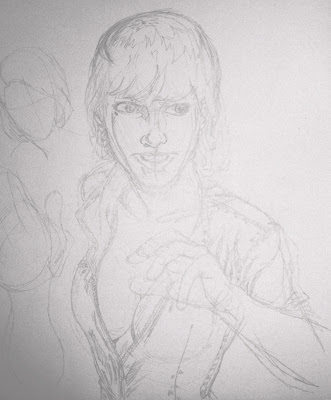 Here's a tighter image with more attention to the denim jumpsuit. Also, I'm fiddlin' with hand placement. I may move the camera back to show more of the hips and legs, but that might force the shoulders down further (otherwise she'd be too tall for the cover). I'm not so keen on that. The hand would also let us show off the finger watch Heinlein refers to. I'm thinking a small transparent sticker with a dim LED display. A clock Band-Aid about the size of a produce sticker.