I promised an action pose. This isn't a specific character from a specific story, just a jedi gal leaping toward something that probably deserves to get whoop-ified. 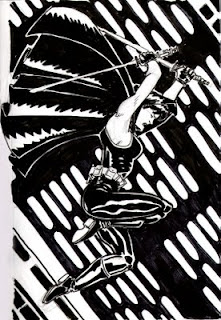 I started this before I realized Spike would show all the Star Wars movies this week. New revelation: Harrison Ford is almost unrecognizable from the first film to the first Indiana Jones movie. I think it's because he's so much more animated in those early films and then he slid toward stoicism, now giving us only the smirk or the angry face.
Posted by Gregory at 10:08 AM