Wait, he's got a movie coming out? 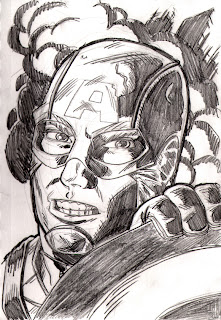 Among my hometown comic gang, I am not the biggest Cap fan. By far. Two of my buddies met in a comic store, casually tossing about Cap strength trivia, and became fast friends. If my Cap interest were a candle, theirs would be the sun. Unfortunately, one is no longer with us, but I bet the other will watch this weekend's movie debut dressed in his Cap costume. And I hope he grins like a child the whole way through.

The Missus remembers the theme song to the long-ago Cap cartoon (somethingsomething mighty shield, somethingsomething yield), cementing her status as a hot mama. I had a Captain America book-and-record set featuring the son of villain Baron Zemo. 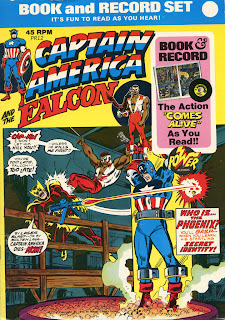 Me? I collected only a small chunk of Cap comics. This was in the mid-'80s, and Cap was one of the few regular titles carried by the drugstore next to the town grocery store. I happened onto the comic as we learned the origin to the Red Skull and saw him supposedly die of spite and old age. I later bought the title when Mark Waid and Ron Garney had their run interrupted by the Heroes Reborn event. But otherwise, no, I can't say I'm a big Cap fan. 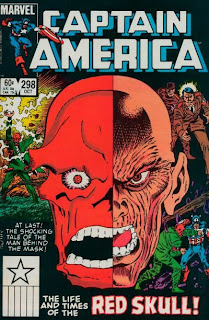 I'll see the movie though. A WW2-era action film always catches my eye, and early reviews say this avoids the b-movie cliches of such films. Plus, the Avengers trailer after the credits is almost worth the ticket price alone.
Posted by Gregory at 7:00 AM