The White Queen and The Purple Alien

A while back, I talked about a Christmas card made for Pat Loika, comic advocate and swell fella. Here's his site.


It's become a tradition. He makes roughly a bazillion cards for friends and acquaintances, and this year he sent out more than 70 of them. That deserves to be written out. SEVENTY. Knowing my love of GI Joe and rasslin, he sent me this:


Around the time I was making his card, I was informed that a group within the Loika Legion was compiling an artbook for him for Christmas. I jumped on it. Of course, our hero likes Thanos, but a look at his online photo albums shows he also likes Emma Frost, The White Queen from X-Men. She was in X-Men: First Class (and technically in the Wolverine movie; the rescued mutant who turns to diamond? That's her.). Pat will often request Thanos or Emma as commissions from the top artists in the biz, and I figured a piece that included both would be to his liking, even if the final product stunk a stinky stank.

The image idea came pretty quickly. Emma likes baubles. Thanos pursues a glove covered in gems. The connection was too good to pass up, and I liked the notion of petite, alabaster Emma slamming down a cosmic bad guy just for some shiny rocks.

Comic debate: Could she do it? Emma has developed into a powerful telepath, and her initial villainous brutality has given way to a more disciplined mind power as she's become a hero. She can't simply brain slam everybody anymore. She proved she can be apply therapeutic techniques to strip away inner demons. By expanding her abilities to more delicate brain maneuvers, she's arguably become more powerful. More focused, at least. (And speaking of "focus" and "Emma," BUY MY COMICS.)

So maybe, a White Queen who finds herself working alongside Professor Xavier, the most powerful telepath on Earth, and sometimes head-to-powerful-head with Jean Grey, potentially the most powerful telepath in the universe, let her glom a thing or two. But would that allow her to brain blast a cosmic alien guy obsessed with death and dominion? I gotta give her a definite "maybe." It's not an impossibility anymore. And that gave me the foundation to pursue the art. Do I overthink this? Did I just ask if I overthink this? Isn't that overthinking the overthink? Methinks so.

And off we went. I drew the pencils in a sketchbook and went straight to inks with Micron pens. 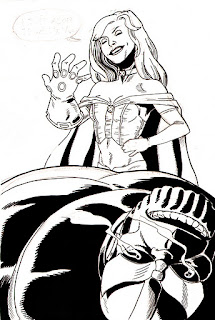 For whatever reason, I just didn't like her head. Seemed off. I originally had the head tilted back more, looking down her nose figuratively and literally, and that angle was diluted in the inking. So I drew and pasted in a new head. 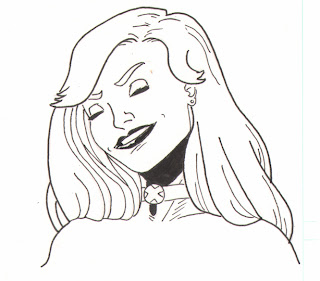 Looked good in pencils, lost its charm in the inking. I drew a third head and pasted that into the card. 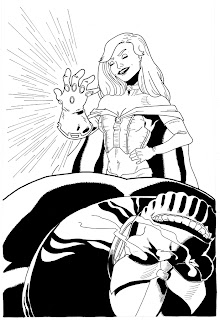 But that didn't work for me either. I drew yet another head, but the bangs and the lips ... nah. Not good. 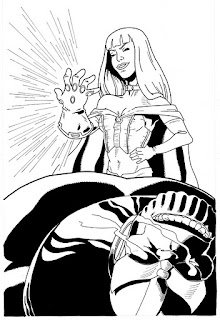 So I went back to the original head and slapped in the color.
I made the text balloon in Illustrator and pasted it into the Photoshop ink/color file and felt pretty good about it.
Then I looked at the image again and realized something horrible: I couldn't remember ever seeing anyone wear the Infinity Gauntlet on their right hand. I was about to send a fresh slab of failure to the one guy out of all my acquaintances who would know immediately that this was wrong. Crap.
But then I realized that I could simply flip the art in Photoshop. As Doom says,"SCIENCE! WHAT A BOON TO VILLAINY THOU ART!"
Buttons pressed, image flipped and saved, and the card was printed and mailed to the Project Pat head honchos. Pat got the art book this week and seems very happy with it. You can see all the book artwork here. 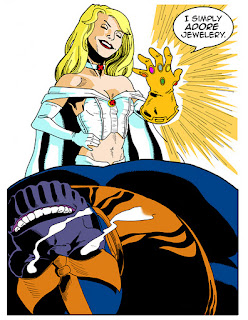 I'm glad to have been invited. I'm glad the notion felt fun. And I'm glad Pat likes it. This was a Good Thing all around.
Posted by Gregory at 7:10 AM