Little Hulk on the Prairie

After decades of denying Little House, (I'm old enough to remember it airing Sunday nights on NBC), I have been converted to the show via my wife, The Countess. If you ever get a chance to see her early school pictures, you'll notice an uncanny resemblance to Half-Pint.When we honeymooned in Atlanta, we would return to our B&B after sightseeing and watch catch a marathon airing of the series. Her sly plan to expose me longterm to small increments has built up my immunity to the show, and now I happily put it on as background noise.

A few weeks back, I commented on Twitter (@GregoryDraws) about our recent upgrade to a 1080p TV connection:


Little House on the Prairie looks glorious in 1080p. Even Nellie (You heard me, Oleson). Oh poop pickles! Typhus in Walnut Grove! #burnitall

I got replies from two (two!) Nellie Oleson accounts.

Wednesday, I posted this:

And that sparked this one-page comic: 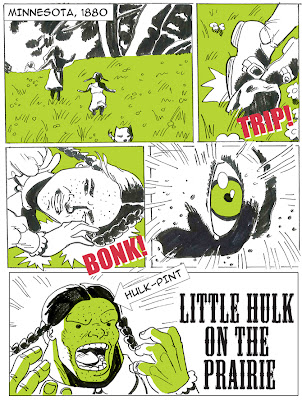 You never know where ideas will come from.
Posted by Gregory at 7:17 AM