A healthy chunk of time has passed since the last costume update, but not much was done. By the absolute dumbest of luck, I found LOTR props in the local costume shop. Here's why that's amazing: First, my tiny town has a costume shop, and, second, my tiny town's costume shop had LOTR props that were at least ten years old. I got a bow-and-arrow set for my wife, who's going as Tauriel. I got her some elf ears too. I got a Sting sword for my son, and they are inseparable. 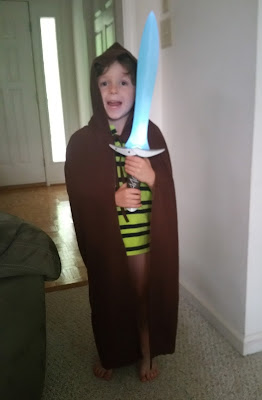 I thought about getting him the plastic Hobbit shoe-feet they had, but they were too big for him. He could never navigate the stairs and elevators at DragonCon. And he obviously can't go barefoot. Flip-flops seemed too flimsy and easily lost. So I bought him these: 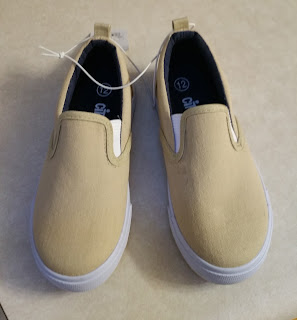 I'll draw toes with Sharpies. I considered painting the soles as well, but they're rubber, and that gets complicated. I think the obvious sneaker feet are funny, and he seems OK with it.

The biggest development sine we last blogged is Mithril. We got him this Frodo costume from Amazon. 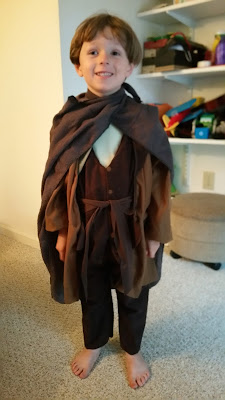 That yellow shirt is a bib/dicky meant to approximate Frodo's shirt. But my dude wants to wear Mithril and have it obvious. We are a simple cosplaying clan; we don't make everything from scratch. But we can customize well, and now I can help after learning to sew last year.

I cut out the yellow shirt bib and traded its outline on a piece of the Mithril fabric I found. 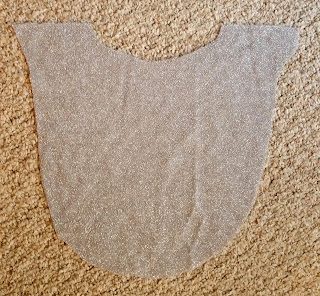 I do almost all my fabric work on the floor. I'm a very tall eight-year-old.

Then I got darker fabric to approximate the base of the collar and pinned it in place. 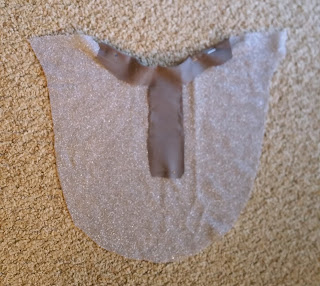 I bent the top of the collar fabric over the collar of the bib and pinned it. The wings of the bib will be attached to the inside of the robe so it hangs in front of his undershirt. I bought gray flecked shirts from Target to blend in behind it. Then I sewed the pieces together. 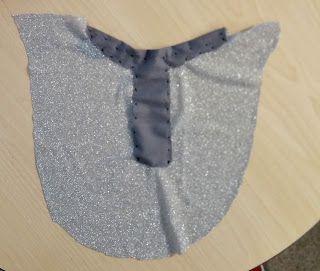 I made the vertical piece longer than necessary to extend beyond the vest. It will look like a large shirt on him. I used black thread because each knot and seam will be covered by the glitter paint for the filigree. 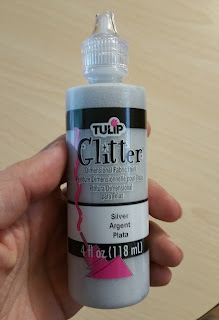 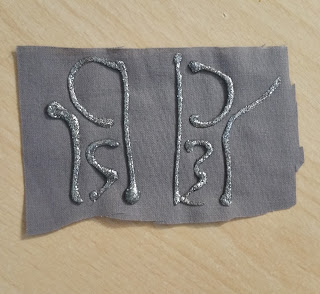 This paint lightens as it dries, and the glitter really pops. It's sturdy and light weight, so it shouldn't be a problem for him. I decided to get gold paint after this test. Also, I decided to apply the paint after the bib was attached to the robe. Then I sat down to get to work. 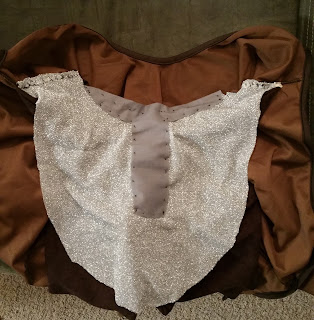 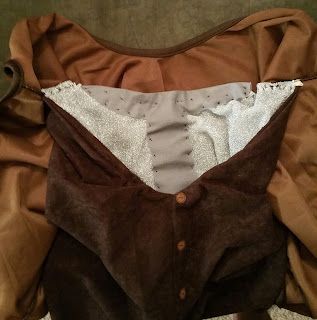 When I cut the yellow bib, I left the material sewn inside the robe. I used it as an anchor for the Mithril by looping the thread through and around it. It made for a sturdy connection on both sides. And the robe is dark enough to hide the black thread. Also, it will be covered by the hooded robe around his shoulders.

I showed each step to my wife for her approval as I am still brand new at this stuff. When I paint toes on his shoes and apply the decoration to the Mithrill, his costume's done. He can't wait to go.
Posted by Gregory at 10:59 AM