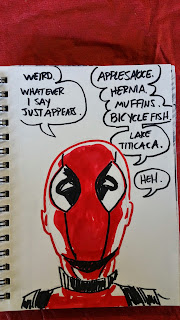 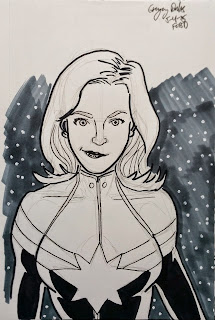 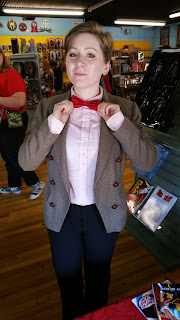 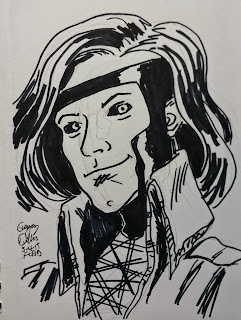 Once again, I set up shop in Asheville, NC's Comic Envy to offer free sketches for one and all. I also set up a donation jar, and people again shocked me with their generosity. I heartily recommend this to other artists, and I might start doing it at cons.

The store opened at 11 and closed at 7, and I left the table once, I think, to go to the store counter.

(You're wondering about bathroom breaks. The store staff offered to spell me, but I didn't go. No, really. Once I'm behind that table, I'm in a groove. Think of it like a marathon but with more sitting.)

I drew right around 70 sketches this year, including those promised later in the week to regulars with pull lists. I like to put the new customers to the front of the list. Free Comic Book Day gets a lot of folks walking in for the first time, and we want to bowl them over. You can see all the sketches and some costumes here.

The store had costumed folks, other artists, and interest groups, and it was pretty steady business the whole time. Thankfully, they had a sign up asking folks to hush up with any Avengers 2 spoilers.

It's a blur for me. If I didn't write down my sketch list and take pics of as many sketches as I remembered to, I'd forget the majority of the day. I do remember this:

+ Geeking out over Ninja Turtles with a girl who might have been seven. She meekly asked for Michelangelo and only after she was nudged into it by her mom. Very shy. When she said the name, I started reciting the cartoon lyrics (HE'S ONE OF A KIND/ YOU KNOW JUST WHERE TO FIND HIM WHEN IT'S PARTY TIME), and she lit up. And opened up. We talked about favorite episodes, which she knew by name. She had all the details. Only repeated viewings with my four-year-old enabled me to keep up.

+ Asking kids to specify which incarnation they meant by "the old Doctor Who." I'm thinking John Hurt. They meant Peter Capaldi. But I really wanted to draw John Hurt, guys. How 'bout a War Doctor? Anyone?

+ Talking the new Thor with an older lady who a delighted with the idea of a female Thor.

+ Hearing the high school student I'm mentoring say she finished her comic book for her senior project. Now she can say she's made a comic book.

+ Making up new jokes for each Deadpool sketch. I don't read the comic, but I love writing for the character.

+ Selling copies of my trade, provided by the store. I didn't expect that.

+ Googling a LOT of Homestuck and anime for commissions. I know them not.

+ Talking about Agent Carter with teenagers.

+ Drawing Black Panther. I have done at least one every time I've sat down to draw at a con or store appearance. He's gonna explode when that movie comes out.

I ended the day with a supper from Five Guys Burgers, my convention reward for myself and a thank-you gesture for the missus for watching the boy all day.