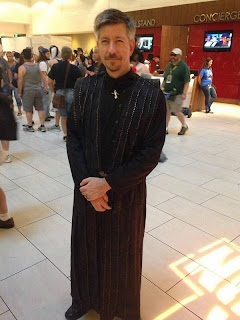 Last year, I chronicled my first attempt to sew a costume for DragonCon. You can read all about that here.

I also got a lot of photos of my son's favorite characters. I showed them last night, and he practically levitated. We'll take him soon. Maybe next year.
I wonder what costume I can make for him.

By the end of October, he solved that issue: Frodo.

We introduced him to Lord of the Rings by way of the Teenage Mutant Ninja Turtles. The Raphael voice actor plays Samwise, and one episode is a parody of Dungeons & Dragons and LOTR. It made for an easy segue. We showed him a little of Fellowship, wary of melting his young brains, and he immediately latched onto the hobbits. Since then, he's seen virtually the entire series of films. He devoured them. He watches them repeatedly. When we told him we were going to take him to DragonCon this year for the first time, he asked to be Frodo. He's stuck with that for seven months. He'll be five next month. He's anticipated this costume for a tenth of his life, and one of those years, he was just a cute doorstop.

We decided that he would get a simple costume, something from a party store or a Halloween outlet. He might get tired of cosplay within a few hours.

He's gone to conventions and parties dressed as a jedi and stuck with it. He had a good time seeing other folks in costumes. But those shows aren't DragonCon, a four-day masquerade party that takes over downtown Atlanta. It's gonna be hot. It's gonna be crowded. Let's go simple, we said. We might skip the sword. (Maybe not, He's asking about that a lot.) We can make a faithful costume when he's older, if he wants to go back. We'd probably make Hobbit feet out of painted loafers. Let's not burden the boy with delicate pieces, I argued. 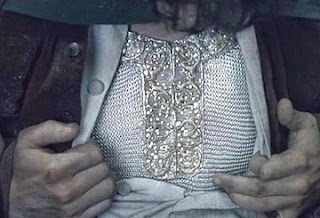 But he was emphatic that he had to have Mithril, the elven armor worn under Frodo's cloak. I can't find a costume version in stores, so I decided to try to make it. Today, I went to the local fabric store to check my options.

I found some sequined cloth that gave me hope. 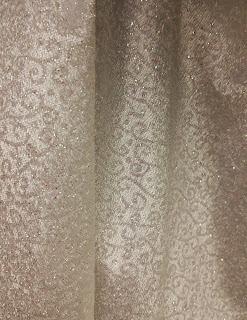 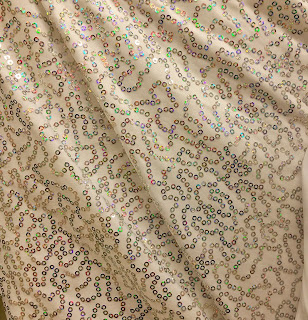 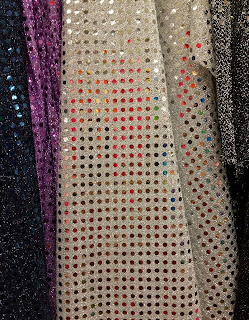 The camera makes the fabric look more yellow, but it could work for a kid's shirt. Or part of one. He really needs only a dickie under his vest and cape. I can stitch together such a thing. I'm pretty sure I can.

I also looked at options for the collar. Early favorites include applique, thread paint, metallic ribbon and looping thread. I could paint the raised elements to match the movie shirt. I could even freehand the design with hot glue, the wonder substance, and paint that. 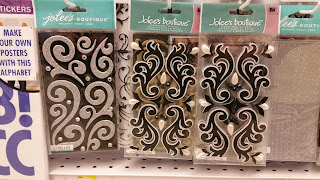 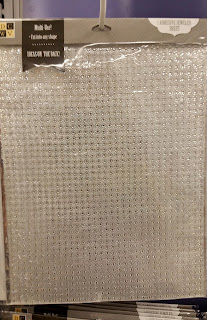 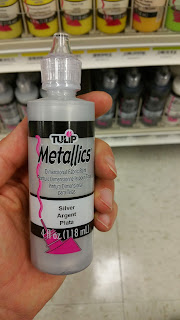 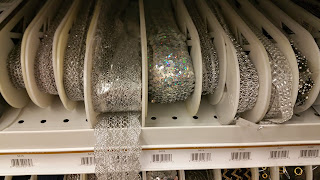 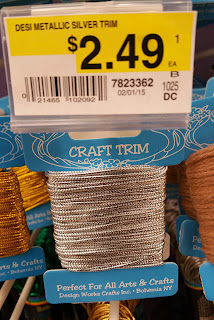 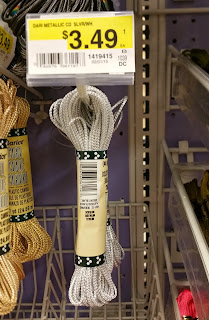 Again, it was the first day, and I'm discovering what one store could offer. We're within 100 days until showtime, and I think we have plenty of time for what will be, admittedly, a very small percentage of his costume.