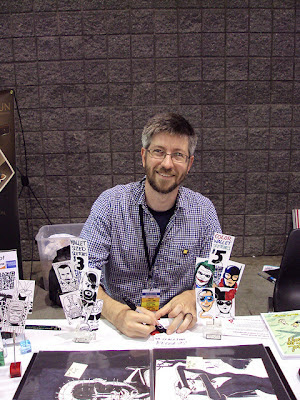 It's the Monday after the convention, and I'm happily exhausted. I've attended HeroesCon for more than ten years, although not annually. I've seen the convention room fill up over the years. New folks don't believe they used to park a fire engine in there for the blood drive. You can't do that now; there are too many tables for vendors and artists. This year was crammed full, and the variety of wares was boggling. I'm glad to have simply seen the show, not to mention be a part of it.

I printed up my comics (available here) and made some black-and-white sketch cards and took my portfolio of larger & older artwork. I wanted to sell 20 4-packs of comics. I didn't. But I sold many more cards than I expected, and I managed to cover the cost of the table. That was ultimately what I hoped for. That got did. Financially then the show was a success. 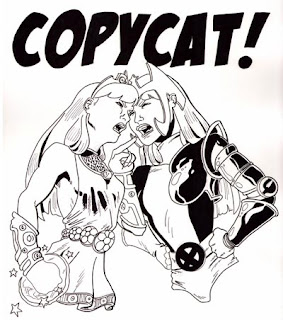 I wanted to submit a piece for the annual auction. I did that too, but my work was bumped to the Sunday floor auction. Still it sold. People traded bids on it. My first year's work went for a decent price, and next year's will be strong enough to make the Saturday night event. That's my new goal. HeroesCon doesn't discourage me in the slightest; it makes me want to do more and do better.

I've worked two convention in Asheville. They were one-day affairs for much smaller (albeit just as curious/enthusiastic) crowds. I was a bit concerned, even anxious, about working a three-day shift at the hugely vast and largely biggish HeroesCon, especially for its 30th anniversary show. I had to talked to a longtime friend last year about working a table for this year's show, but we hadn't worked up specifics. A few days before the show, we confirmed we were going to tag-team the booth, and that made the show less daunting. We took turns roaming the floor, and I was able to take in the friendly madness. Also I was able to buy toys -- a GI JOE zombie bad guy, a Hellboy Rasputin (with Hellbaby!) -- and an Xavier Institute t-shirt. 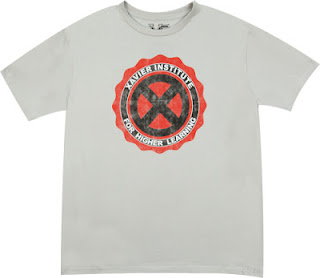 Working the booth was a blur. I spent a lot of time standing and saying hi to folks as they passed, gently offering the sales pitches, lowering a price here, and throwing in a freebie there. When people said they wanted to see the while room before buying anything, I gave them a business card with our table number or a reminder that we were right under the sign identifying the 900 block of tables. Some did come back. If I didn't have a sketch card already made with the character they wanted, I was glad to take requests for them. I took it as a challenge, almost a friendly dare. "Can you draw Ghost Rider?" You betcha! "Spock?" No problem. "Lion-O?" Gimme ten minutes. Lookit this happy customer. 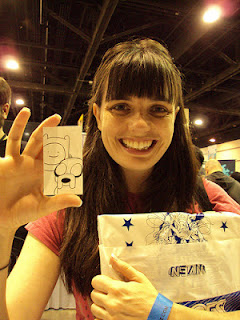 This was what the majority of con folks looked like. We were a little overwhelmed by it all, but the joy of the con was infectious. I am pooped, but I still have that buzz of camaraderie and shared interests. I talked GI Joe and Loki and Buckaroo Banzai, and I got to draw a vampire hamburger muppet.

Favorite moment? I'm gonna go with Saturday night. I was feeling bummed about the auction (my fault for being so specific in my expectations). I just got off the phone with my wife, and I knew virtually no one in the hotel lobby or the auction. I felt isolated, but I wanted to make the effort to talk to people. It was Saturday night at a HeroesCon hotel, and the lobby was packed with my people. Even if I couldn't find conversation, I could glom off the vibe a bit. Down I went. I rode the elevator alone to the lobby and checked my reflection one last time before the doors opened. When they did, I was standing eye to eye with Stan Lee. We smiled and nodded before someone behind him asked if he'd say hello to their child. Lee turned, and I slid out of the elevator and out to the lobby. That was a good moment.

There's a local convention in October, and I'd do it tonight. HeroesCon left me jazzed about making comics and art and talking to folks about what we love and why. I talked to kids. I talked to grandmothers. I talked to people who make things I would never come up with, and now I wanna make more of my stuff. I leave the convention feeling like I just ended a run of theatre shows or after a strong 5k run. I aim to be back next year.

You can see all my con pictures here. Check out all the costumes. These two happened to walk by at the same time. This picture, with the artist tables behind it, might epitomize HeroesCon. 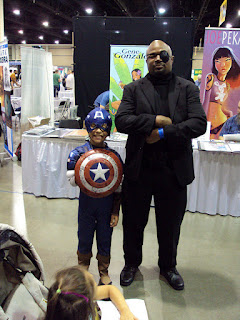