Once more, I was invited to sit in the midst of Asheville's Comic Envy, and I offered free sketches for the day. I set up a tip/donation jar and crank out drawings for one and all. I've done this for about five years now, and it always goes well. Fun time. The day flies by.

I get to talk to kids about their favorite characters and encourage them to draw. I point out virtually all the materials I use that day -- Sharpies, pencils, sharpeners, Whit-Out pens -- can be found in grocery store and department store aisles for school supplies. $10 bucks, kids. Get to drawing. Make the comics.

The first request was a Harley Quinn for a little girl, and the day included Spawn, Thomas Jefferson, Deadpools, Batman, Batgirls, Mega Man, and someone's baby. You never know what you'll be asked to do, and I tell them that, if I can Google it, I can draw it. One woman who studies fencing asked for Princess Mononoke holding a German two-handed sword. Another wanted a wolf warrior. The only way you can prepare is to loosen up your drawing muscles and keep the sketches simple. I do headshots for the day. I also have a standard image for Deadpool, and I add a new joke text each time.

I did roughly 60 sketches for the day, including some I promised to draw later and add to customer pull lists. It's a quick way to bump the list a little and get drawings to people walking into a comic store for the first time. Those drawings included Snape, Harry Potter, and Dazzler Thor. You never know.

The next day, I worked a booth at the Asheville ZineFest and busted out this Skeletor for my plastic booth buddy. 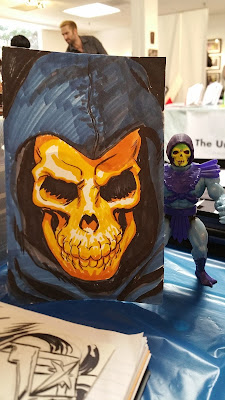 A big weekend! Next up, The Deputy and I get dressed up for a local comic show where I DON'T have a table for once. Party on.
Posted by Gregory at 8:13 AM