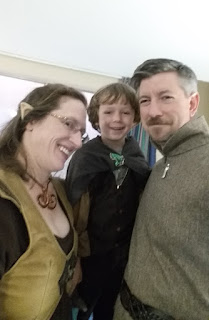 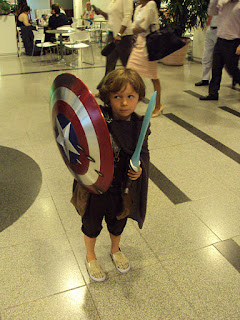 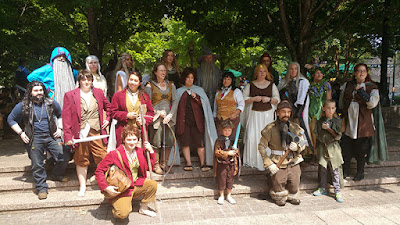 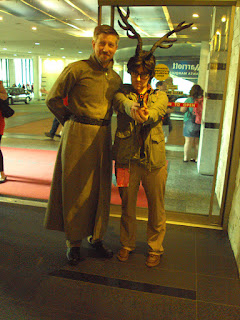 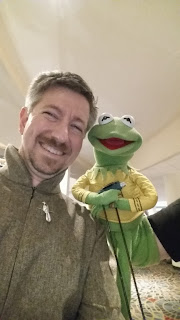 The Countess and I have gone to DragonCon for years, even before we were married. This was the first year we took The Deputy. He asked to go literally the minute we arrived home from the 2014 show, and, since October, he wanted to go as Frodo. He turned five in June and talked about the trip every week of the past year. We made him a costume, prepared him as best we could in picture etiquette and mob navigation, and hoped it would go well.
He was in heaven. We told him we might meet some of the actors from the Jackson films, and we did on Sunday: Gloin, Fili, Bombur, Radagast, and Denethor. They loved him in his Frodo gear and hobbit shoes and marveled at his Gimli beard from flatbear. They went above and beyond for him; frankly, so did all the costumed folks we approached for pictures. Spideys and Peggys and elves and Sith and Winter Soldiers … we thanked each of them then, and I thank all of them now. They handed him props and weapons to hold without hesitation, and that eager generosity bowled us over.
Ultimately, he could do the show for a few hours at a time, and that was fine. Atlanta offered a lot to give him a breather. He would sleep like a pile of rocks, and I would get pictures of his favorite characters while geeking out over my own (Will Graham! The Saga couple! Kermit!). You can see my best pictures here.
I got to take pics with a slew of Game of Thrones people, including sterling brother Baelishes.
It was a great year. He’s already planned his TWO costumes for 2016. God help us.
Posted by Gregory at 12:53 PM