HeroesCon Captain Marvel Print (And The Other One Too)

As soon as I sat in my booth at 2012 HeroesCon, I felt like I hadn't done enough for the show.

I had my comics to sell. I had some "face cards." I had some larger sketches in my portfolio to sell. I had a big image to submit for the auction. But I didn't have high-end stuff. Nothing with the polish I wanted. I couldn't in good conscience ask for substantial money for these things. And, in a dollop of irony, I had my best piece, a Captain Marvel, signed by writer Kelly Sue DeConnick after I promised her it would never thereafter leave my house. Sure, I could sell that with the signature. I could also kick dogs.

So when I considered what to make for the 2013 show, I scheduled them between HeroesCons and somehow got them finished well before the 2013 show. Then I learned that the ringleader of the Galactic Captain Marvel Appreciation Society (the CarolCorps) worked at my local comic store. She was planning an inaugural meet-up at the convention. And I thought those people needed a souvenir for the occasion. I had the time. I clearly like drawing the character. (Notice in that 2011 comment section who I suggested should write her in a new comic. So close.) I got to work. 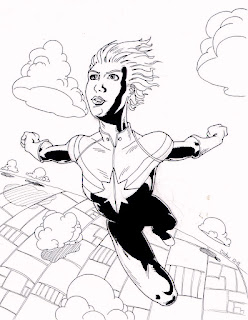 I did this piece last year(ish) and used it as a starting point for the meet-up print. 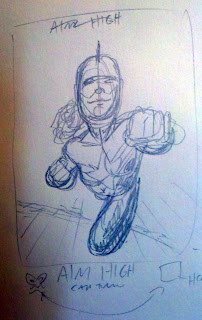 I considered a tagline harkening back to her Air Force days, but that threatened to make the figure smaller. No woids then. 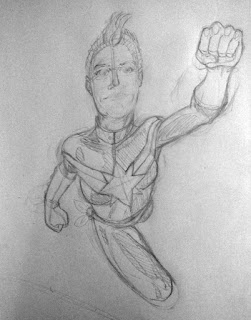 Here's an early sketch at a larger size. 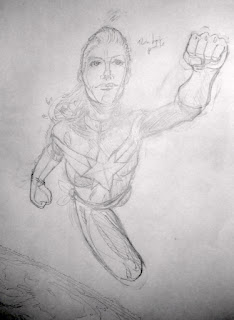 I cleaned that up a bit in a new sketch. My wife modeled the foreground arm because she'll make a fist at the drop of a hat because she hates it when people drop hats or something. 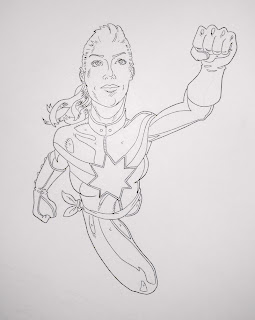 When I was happy with the pencils, I lightboxed it onto bristol board and inked it. 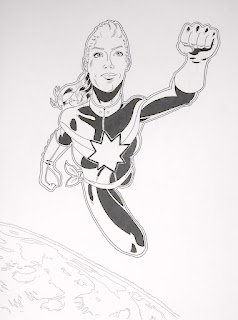 I worked up the figure blacks and planet lines before I tackled the star field. Notice the double outline around the figure.
(Is that earth? Maybe. Why isn't she wearing her helmet? Who are you?) 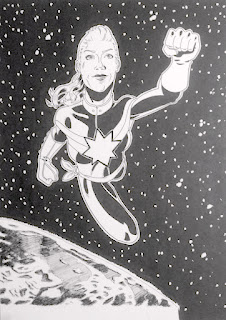 Using Sharpies the size of a toilet roll, I inked the background and added dots with a Wite-Out pen. 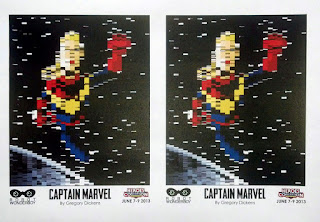 I colored it in Photoshop, made the print layout in Illustrator, and tried to print it through InDesign. This is what my printer gave me after it decided it was an Atari. I made that into a PDF to print again, and it looked like this: And that's not bad.

They're about 5.5 by 7.5 on cardstock, and the supply is limited. This is for the CarolCorps folks, and I hope they like it.

Oh, I also made this print to sell. 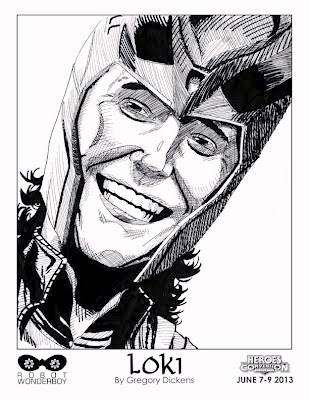 The hook here is that I'll letter a word balloon in the bottom right-hand corner, so Loki will say whatever you like. It's $5 each at 8.5 x 11. I haven't used this much crosshatching in years, and it kinda works a lot. The original art is going to the friend who let me design a hero for her son and then use him in my comic (the character's name has changed since then from Arsenal to Armory).

Like I said, I wanted to offer better stuff this year. I think I managed that.
Posted by Gregory at 11:40 AM