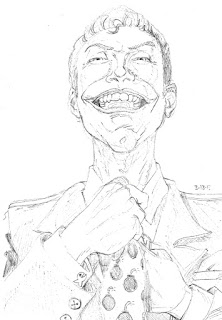 I've no problem with, say, the Heath Ledger Joker. For every distinct Batman iteration, we'll have as many Jokers. There's room for that in the Bat mythology; you can pick and choose from the spectrum. I like what Grant Morrison did with the two in Arkham Asylum, for instance. There, Joker was practically a drag queen. Morrison also introduced the idea that Joker had a super-power, an elevated degree of insanity that helped explain why there are so many Joker styles: He invents himself anew. He's a quantum crazy brain. I can dig that.
Posted by Gregory at 6:11 AM