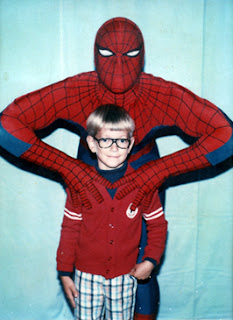 Your Humble Host is a lifelong reader and scribbler of comics.

In 1990, at literally the first weekend at Brevard College (go Tornados), I began work as a school newspaper illustrator. That gig blossomed to an co-editor position where I wrote now-cringe-worthy columns about stuff I kinda sorta maybe knew something about.

Upon transferring to East Carolina University (go Pirates), I began work for The East Carolinian as a copy editor and sometime contributor. That led quickly and somewhat awkwardly to the managing editor position. The next year, I was named General Manager, a term of office deemed a success in that the newspaper offices didn't burn down. I also produced a three-year comic strip called Nick O'Time and wrote editorials and articles and delivered the paper to the printer on a borrowed bicycle in the dead of night.


I graduated there in 1995 and got a job with The Herald-Journal, a New York Times syndicate newspaper, within four days. So, yes, English majors can find employment with English majory skills. During the following six years, I made ads, assisted the webmaster, prepared photos for publication, created page layouts, wrote a regular column on comic books, contributed to a weekend arts section, and did illustrations. That last gig got me the state press association daily illustrator of the year award (punctuated by me nearly fainting dead away). I also began a regular pro wrestling column for a Florida newspaper. How proud were the parents that day.

In 2001, I shifted to Creative Loafing/MetroBeat, a local alt-weekly paper, as a graphic designer, becoming half of a two-man production office. I racked up a few national awards for design and illustration before moving out of state in 2004 to woo my tomboy.

I'm now the publications manager for Sigma Alpha Iota International Music Fraternity, producing the newsletter, magazine, and website. A few more national design awards have ensued. On the side, I've made minicomics and contributed to comic anthologies, including Fluke and Wide Awake. 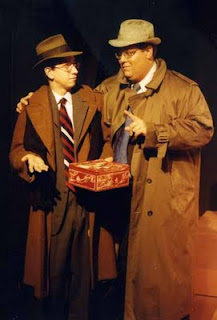 I've worked in collegiate and community theatre since 1991 in two Williams plays, three Simons, a Christie, a Rand, and Rodgers & Hammerstein. You know, the staples. I've stage managed, directed, and sung onstage. I've played a newlywed, a Nazi, a nerd, a schemer, a movie star, a heartbreaker, a dying drunk, Thoreau's brother, a two-timer, a lawyer, a neurotic pianist, a sidekick, and Bob Cratchit & the Ghost of Christmas Yet To Come in the same play.

Support your local theatres. Those are your neighbors keeping art alive.

Since 2010, I've created my own comic books under the Robot Wonderboy studio name.

I am the luckiest man alive.