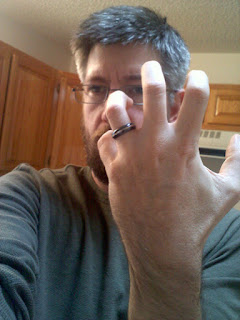 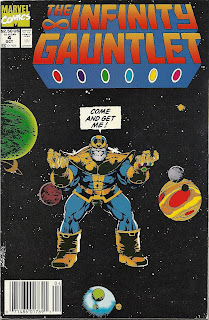 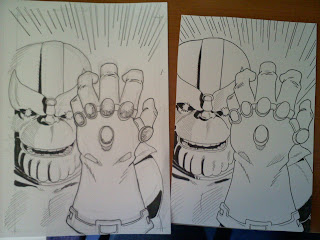 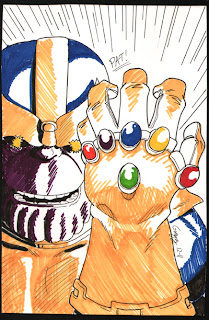 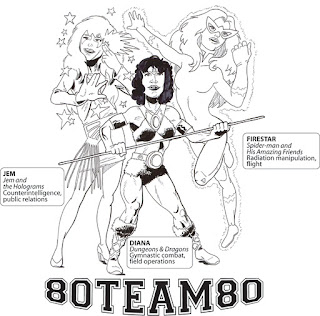 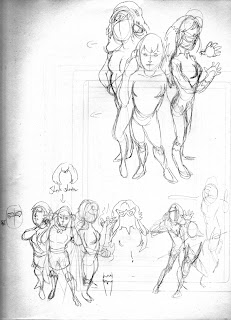 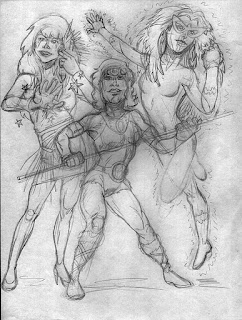 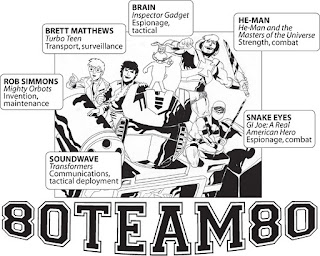 The dog, of course, is the leader. Snake Eyes is his enforcer, and He-Man is the party monster.
I couldn't come up with any women at the time, and the drawing represents my answer for the show. Now, I'd add either Firestar (Spider-Man's amazing friend), Jem, or Sheila the thief from the Dungeons & Dragons cartoon.
Posted by Gregory at 8:08 AM 1 comment:

The Process of Podunk

As I noodled through ideas for the t-shirt shop, I dusted off some art from my college days, including a doodle of a '50s giant-monster movie. My monster would be an entire town, not as individual zombie/mutants on the shuffling prowl, but as a collective creature: Podunk, The Town That Walked Like A Man.

When the Wide Awake folks asked me to contribute for a horror anthology, I made a four-part Podunk story. 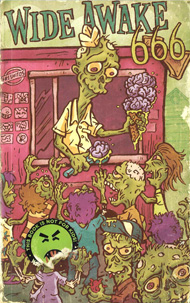 It was over-thought and under-drawn, and I always wanted to revisit it. But hero comics bumped it to the bench. The idea of the Podunk movie poster stuck with me as a viable image, however, and I thought it could work for the t-shirt, especially given our many small towns.

Using the basic image I drew years ago (and seem to have misplaced), I kept in mind the screenprint color limits and simplified the colors. I played with color separations and foreground design to sell Podunk's size. 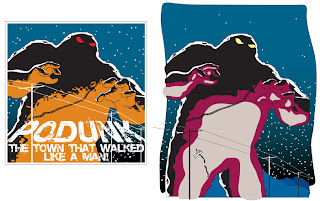 And then I thought I could make it simpler and better sell the menace and scale. As I strolled through Barnes & Noble on a lunch break, I saw this cover. 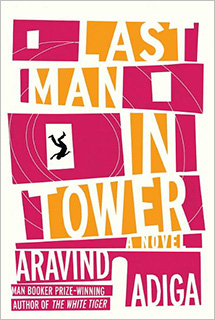 This is a loving homage to Saul Bass, a design genius who made some of the best movie posters in the '60s. I Googled a batch sample to keep in my peripheral vision as I drew. I had swiped the basic design of the second poster on the top row for a MetroBEAT cover years back. 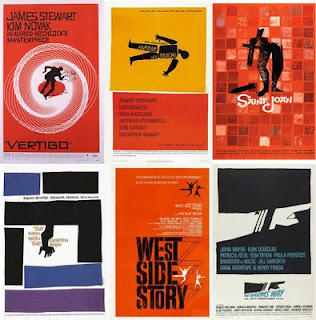 I sketched a basic design in Illustrator. 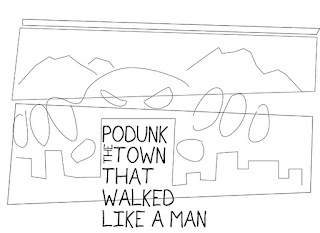 I then created color segments. I wanted the buildings to be asymmetric and wonky to suggest anxiety. Also the colors would be uncomfortably bright in this context instead of happy and sunny. The white lines in the red blocks would underscore the tension and help break up the giant white monster silhouette. I got rid of the mountains behind him, leaving him the largest item. 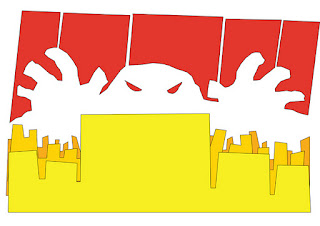 Then there was the question of how the text and where to run it. That big building block seemed like a good fit. I added black to lock the buildings in the foreground and help the text jump out. 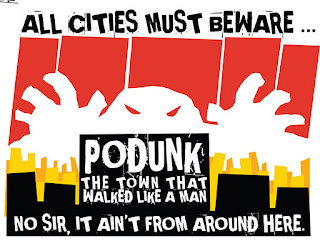 I decided to stretch the arms higher to make as fearsome a profile as practical. 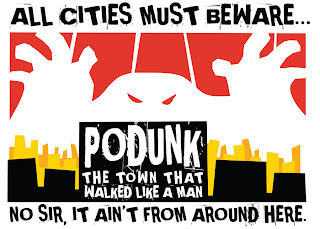 And that's when I thought I should full vertical with the design to REALLY push the size of Podunk. 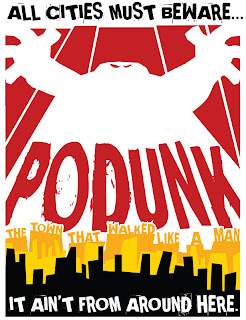 I squeezed the white lines to mirror Podunk's profile in perspective, made the name equally as towering, and changed up the building layout. That seemed pretty good for an experiment of style.
And then I considered a scene away from the city and how a change of color might affect the poster's tone. Our guy now became contemplative of his place in the world, reminding me of DC Comics' Swamp Thing, a man-monster who doesn't seem to fit anywhere. What if this guy is the backwoods Godzilla, a spirit of the mountains who balances the egregious threats to the area? Not an eco-warrior but a monster fighter and a way to play with mountain legends and myths. That story might have a poster like these: 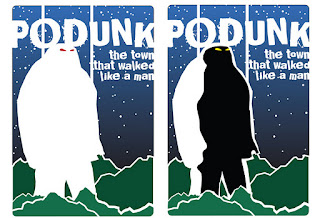 I like the distinctions, even as they stay within the same style inspiration. And when I finally put his story down, I'll have a choice as to which tact to take. I like the idea now of a flipbook with both stories getting some play.
Now let's see if the t-shirt shop will bite.
Posted by Gregory at 8:39 AM No comments:

Still making t-shirt art proposals (even though that shop has yet to respond to my emails and calls), and I'm at a resting place with this one.

Might add some text, might add some motion lines. I dunno. But it's at a point where I'm gonna let it sit for now.

I took some reference pictures for the pose and drew it in Illustrator and colored it in Photoshop. I've had the idea of a luchadora skater ever since I heard Beck's "Qué Onda Guero." I wanted her to have the late '70s relaxed skate posture and clothing instead of a current style. I think the wheel color helps sell that.

UPDATE: I realized I needed to sell the '70s vibe more and decided to give it a title. This gal is my cloudy memory of the quintessential late '70s tomboy, the kinda gal who rejected the page haircut and Farrah makeup. I picked out Cooper, the popular iron-on font that was all over that decade, and angled it with a customized O design. I colored the rest, giving me a new resting point for the art. 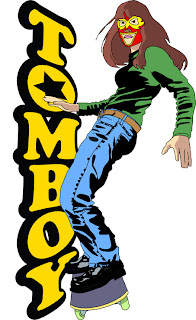 Posted by Gregory at 9:58 AM No comments: